The muscadine is believed to be one of the first native grape species cultivated in North America. Its fruit is popular in jellies, eating in hand, juice and winemaking. And, there is growing interest in muscadine sparkling wine!

To control explosive growth and enhance fruit production, Nature Coast Master Gardeners embarq on an annual vine pruning exercise. ‘Carlos’ is the variety found at Levy Extension Center. It’s self-fertile and used for wine or juice production with medium sized bronze grapes maturing around August to September.  Major pruning is done during the dormant season. If green leaves are on the vine, wait until February or March to prune (Andersen et al, 2020).

Tools needed include bypass pruner, safety goggles, gloves, and a disinfectant to wipe down your equipment. Sharp bypass pruners have a scissor like action to neatly sever vines. 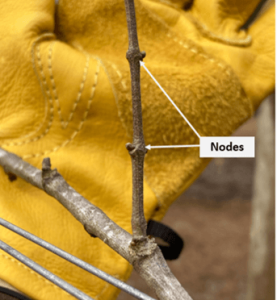 Address the vine and identify cordon. Cordons are the left and right branches, primary “arms” on either side of the trunk. Fruit bearing shoots develop along the cordon.

Sometimes clear sap seeps from the pruning cut.  This does not hurt the plant. It is believed warm soil temperature; ambient air temperature and soil moisture causes the cut to “bleed.”

Use household hydrogen peroxide, 10% household bleach solution, or isopropyl alcohol to disinfect tools. For the latter two, rinse with clear water to remove those corrosive chemicals. 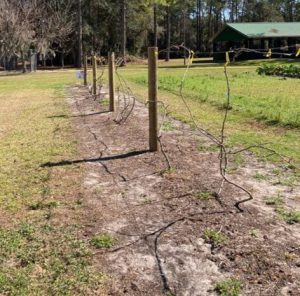 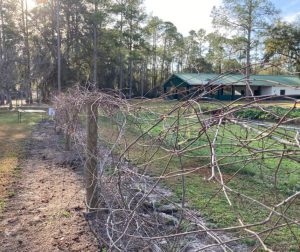 If you like to handle pruners and plant material, muscadine may be the vine for you (before pruning left image, after pruning right image)!

Many thanks to UF/IFAS Master Gardeners; Sue, Michael, Peter, Debra, Eugene, Lisa, Jim, Roger, Martha, Mary, and Guendolyn for assisting with these fun and educational videos. Until next time – Happy Gardening!