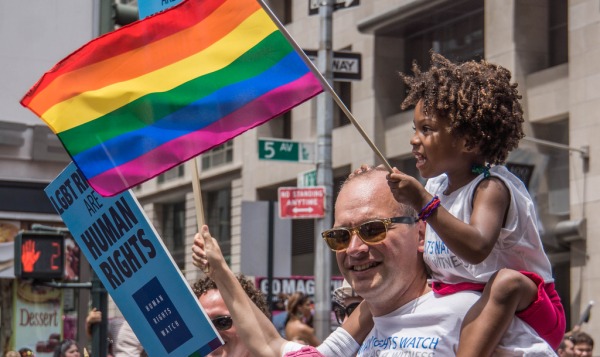 Gay Adoptive Fathers: What Does the Research Show?

This post is honor of Lesbian, Gay, Bisexual and Transgender Pride Month.

With recent historic rulings on gay marriage and big changes in public opinion about the subject, it seems that America is becoming more welcoming to gay and lesbian families. However, families headed by gay fathers often still face significant prejudice. In addition to discrimination due to their sexual orientation, they may also encounter those who believe it isn’t possible to parent well without a “mom” in the home.

A recent small British study focused on the well-being, behavior, and adjustment of adopted children in families headed up by gay male couples, comparing it to that of adopted children raised by lesbian or heterosexual couples. There were about 40 couples in each group, and children were between the ages of 3 and 9.

On average, gay fathers were less depressed and less stressed about parenting and more responsive to and interactive with to their children than heterosexual parents. Interviews showed that they also tended to be warmer towards their children and less aggressive in their disciplinary methods than heterosexual parents. Meanwhile, the percentage of children whose parents rated them as having notably problematic behavior was about the same in all groups. Children in all three groups also showed similar levels of stereotypically gender-typed behavior.

Though this study was small, these gay fathers appeared to be providing a highly positive environment for their adopted children, with no negative consequences seen. These findings suggest that matching prospective gay fathers who wish to adopt with children across the country awaiting placement would be a win-win situation.

Indeed, more than 100 scientific studies have found that most children raised in gay- and lesbian-headed families are “developmentally and socially well-adjusted” (Perrin, Siegel, & The Committee on Psychosocial Aspects of Child and Family Health,  2013, e1378). Researchers writing in the journal Pediatrics conclude that children’s well-being is affected far more by the strength of their family’s relationships than by the gender or sexual orientation of their parents. The well-known American Academy of Pediatrics has issued a statement supporting the legalization of same-sex marriage and affirming their belief that making marriage available to all strengthens families and benefits children’s development. It remains to be seen whether same-sex marriage will become a national reality, but this organization is standing behind its legalization.

← For Older Adults, The Internet Might be a Lifeline
Stop Dirt at Your Door: Leave Contaminants Outside! →