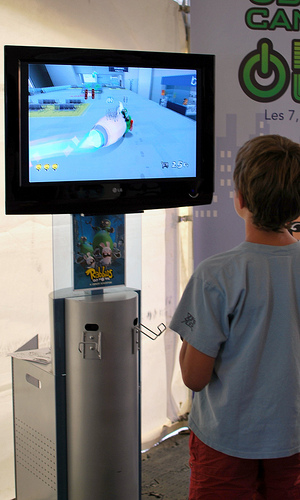 Do video games harm children? Experts have been debating this question for decades. Though some studies have linked gaming to behavior concerns and problems in school, it’s often been hard to tell whether the games are really the cause. Maybe avid video game players are more likely to have these issues in the first place.

Researchers writing in the journal Psychological Science recently tried an experimental approach. They located about sixty boys in first through third grades who did not yet own a video game system. All were given basic tests of their academic achievement, and teachers and parents rated their behavior and attention skills.

Then, half of the boys were given video game systems, while the other boys were not. During the next four months, parents tracked how much time the children spent playing video games and doing learning activities such as homework and reading.

At the end of the experiment, boys’ academic achievement was retested. Those who had received game systems now were scoring lower in reading and writing than the other boys, though their math scores were unchanged. Their teachers also reported that these children were having more trouble learning in class. However, neither parents nor teachers reported any increase in behavioral problems.

These findings suggest that receiving a gaming system may lead boys to spend less time on homework and reading, which can affect their school achievement. While this small study couldn’t show whether this effect would persist long-term or would also apply to girls, it’s important to consider the balance of time between games and other screen time and homework in your home.

← What We Look for in a Partner: How Has it Changed Over Time?
“Smart Growth” Neighborhoods and Kids’ Fitness →