Skip Navigation or Skip to Content
Home » UF/IFAS Extension Franklin County » How To Garden (or Not) On St. George Island, FL

How to Garden (or Not) on St. George Island, FL “I am not retiring in Min-ne-so-ta, just so you know,” is how my dearly departed wife (Diane) informed me that she had her eye on St. George Island, FL. Then she set the hook: “Don’t worry; I will take care of the garden. You can give away the lawn mower and just go fishing.”

When Diane returned from the garden section of the Apalachicola’s Little Shop of Horrors, she invited me to pick up a shovel and follow her to the back yard, 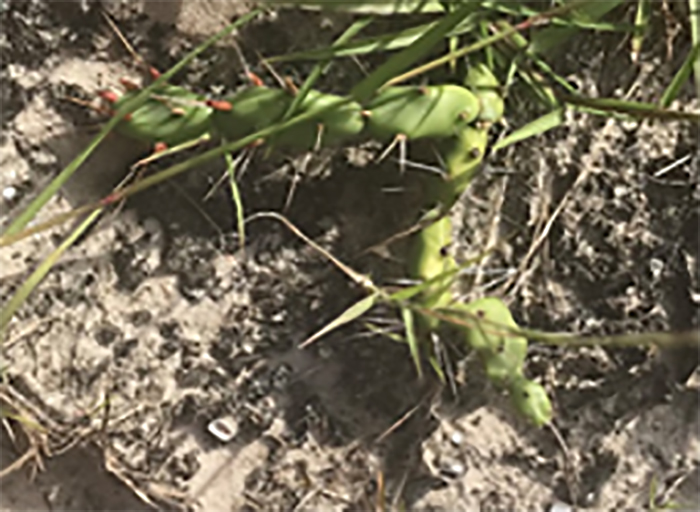 For convenience, each native plant is guarded by a nest of fire ants (native or imported red). When trying to dig up the two-foot-long tap root of these plants, one is likely to do the St. George Island hokey-pokey to the tune of “Ow-ow-ow!” We learned quickly that tea tree oil applied promptly works like a magic eraser on stings that normally take two weeks to heal.

Naturally, Diane filled our van with Knock-Out® Roses, plumbago, impatiens, and various annual bedding plants. Diane would point to a spot where she wanted a plant, and I would dig a hole, fill it with a plant and topsoil she had purchased, and she would water it in.

To make a long story short, the sun and salt spray on St. George Island knocked out the roses in a couple of weeks, the bedding plants went to sleep, and the impatiens told us to be patient. To be fair, a couple of them survived a few months and even bloomed now and then.

Now, the first thing most folks will do when they arrive on St. George Island is collect seashells. By the end of our first summer, Diane had hot-glued seashells to every piece of craft board she could find at the hobby shop, and our walls were covered inside and out. Seeing that she had a few tons of extra shells, Diane got the idea that the big cockle shells and heavy clam shells would be great mulch. An innocent bystander might think I am exaggerating when I say, tons. Innocent bystanders did not know my wife.

Nevertheless, by the end of the first year, we had not made much headway against the cat briars, and the fish in Apalachicola Bay were safe from my flailing. I was tied up, and my brother-in-law was in tears from laughing so hard. 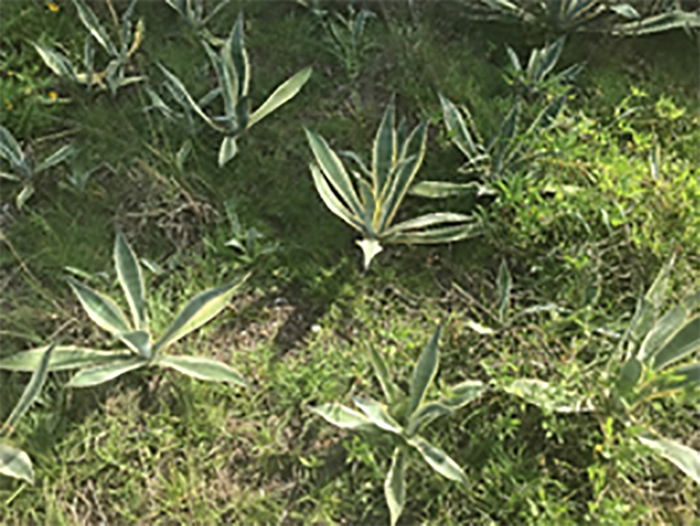 As we watched our carload of garden plants wither and die, Diane began to look around the island to see what was growing. Among the first plants she spotted were century plants or Agave americana as all Master Gardeners will know. So she decided to do the county a favor and swap out the briars and cactus in the county easement for century plants. It was a stroke of genius. The plants have taproots that may not reach China, but Georgia is a sure bet. And within six months, they sprout pips or pups that may be relocated.

One member of my 2021 Franklin County Master Gardener Volunteer class commented, “I know exactly where you live. The fence is completely surrounded by century plants.” Bingo.

A Mother of Thousands

Then a friend who happens to be a horticulturist visited. Joe showed Diane a Mother of 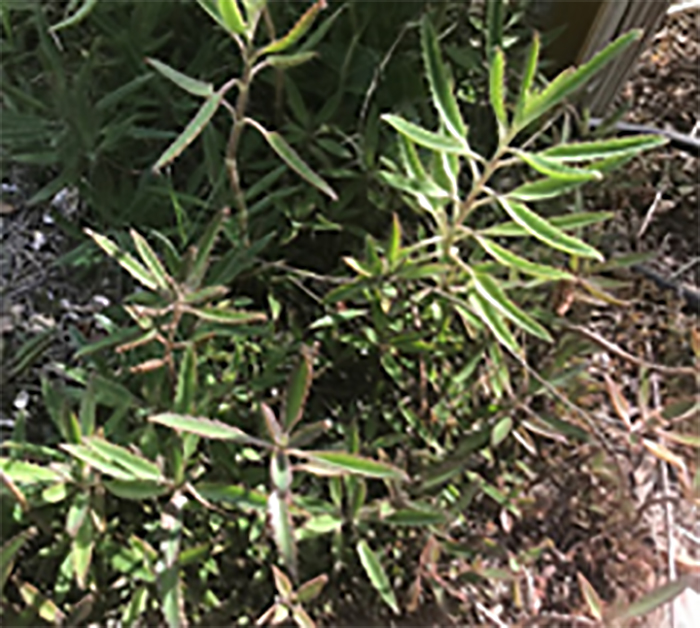 Thousands (Kalanchoe daigremontiana) plant and said, “I have never seen it bloom, do you want to plant one?” When grown indoors, the Mother of Thousands will not flower. But then, it does not need to flower. Each leaf forms dozens of tiny plantlets along the leaf margins, and when the leaves touch the ground or something brushes against them, the little plantlets are free to grow. Within months, even our sandy sandy sand was covered with tiny plantlets that spread from the yard into the road ditch. If you see them all along the county easement, you can blame me. I failed to stop her. 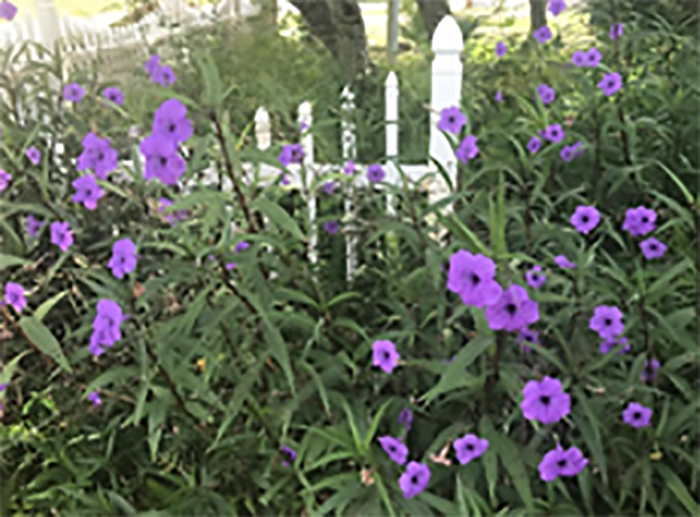 With two successes in a row, Diane hit upon her third “killer” plant, Mexican petunias (Ruellia simplex). Naturally, unwary gardeners can buy these nonnative invasive plants from local hardware stores. Just look next to the machete section, because you will need a machete to hack them back. True, Mexican petunias have several redeeming features. Like plumbago, they have prolific, beautiful blue flowers. Unlike plumbago, they are nearly impossible to kill. Diane quickly found that she could propagate them by hacking off a foot long section and putting it in a wine bottle filled with water. Ominously, there were usually roots by the next day. More ominously, within a week the roots were growing out of the wine bottles and heading for the planting bed.

Diane did not care. She planted Ruellia along every walkway, and simply bought a cordless hedge trimmer to fight them back. Now Dr. Pat Williams will tell you that a weed is just a plant growing where you, the goddess of the garden, do not want it. Diane wanted it, so it was not a weed. Admittedly, several types of butterflies, bees. and moths feed on the nectar that Ruellia produces in abundance.

After 20 years of rearranging nature on St. George Island, Diane played her final trump card. She died of cancer, leaving me alone to figure out what to do with her plants. If this makes you sad, try to imagine what the plants think! “I can hear my plants talking to me,” Diane used to say. And now I hear them too, but I think they are yelling, “Are you deaf or blind or just stupid?” My mind had been elsewhere. Diane had no idea how complicated it is to catch fish around here. There are 400 kinds of freshwater fish, inshore fish, offshore fish, migratory fish…you get the idea. So, when she died, I signed up for the 2021 Franklin County Master Gardener Volunteer class for the same reason inebriants have to take Defensive Driving courses. Everyone will be safer.

Radio newsman Paul Harvey used to end his programs by saying, “Now, for the rest of the story…” So as our readers can tell, wait, there is more…but let me save that for another day. Because from here on, all the jokes are on me!

Photo 4. Mother of Thousands (Kalanchoe daigremontiana), a native of Madagascar that is an aggressive spreader on St. George Island (James Hargrove)

Pat Williams, PhD, is the County Extension Director in Wakulla County, FL and oversees agriculture/horticulture/natural resources and the Master Gardener Volunteer program. He has lived in 10 states and brings a wide range of knowledge to Florida. ...