Everyone who has visited our Panhandle beaches is likely familiar with the medium-sized, pale white crab called a ghost crab; often seen scurrying over the sand and into a burrow for cover. 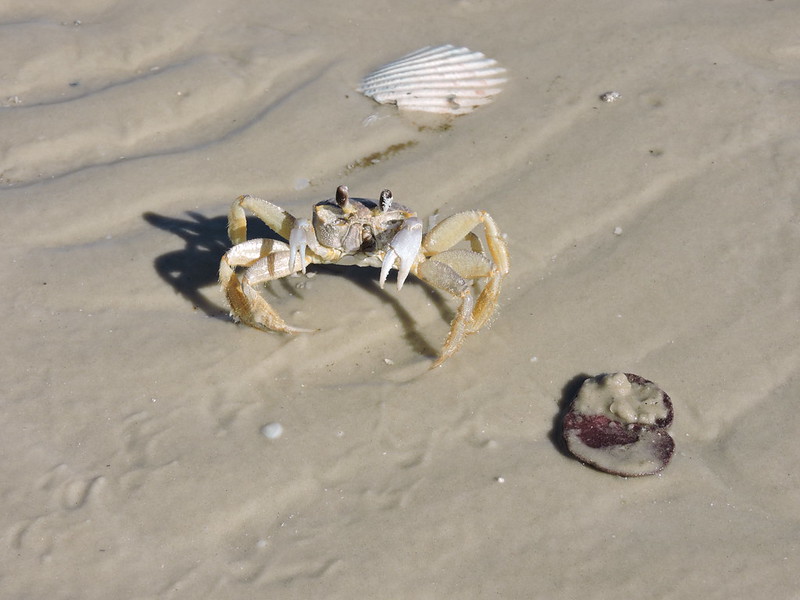 The species is perfectly named, as you generally will not see the animal until it moves. For this month it seemed appropriate to highlight some of our ocean creatures with names befitting the traditional “spooky” images that occupy our minds near the end of October. Believe me, the ghost crab is one of the least spooky of the lot. We can only hope the costume-designers do not move in this direction.

Zombie worms…a group of polychaete (many bristly appendages) worms that survive by boring into bones that settle on the ocean floor. Whalebones, in particular, contain lipids that sustain the worms, but not without the help of symbiotic bacteria that break down the proteins to release nutrients the worms can use.

When scientists studying these creatures realized that only females were colonizing the bones, they had to look deeper to understand how they were able to reproduce. Deeper…as inside the gelatinous tube that surrounds the female’s body. Female worms literally house a “harem” of many hundred microscopic males who fertilize their eggs before they are released.

Vampire squid…a small species of squid (now thought to be more closely related octopuses) that will rarely exceed one-foot in length. This deep-ocean cephalopod may appear quite cute at first glance, but it has a hidden secret inside the webbing of skin that connects its eight arms. It has the traditional suckers out near the ends of its arms but the inner portions of the arms are covered with fleshy spines that appear quite menacing. When agitated, it can turn itself inside out, so to speak, with the spiny mantle covering the body for protection. They can also expel a sticky cloud of bioluminescent mucus to confuse predators, rather than the inky substance of their close relatives. Given its appearance, the vampire squid seems aptly named. However, this fierce-looking creature is a “sheep in wolf’s clothing,” since it does not feed on blood at all and actually collects detritus (dead organic material) to sustain itself.

Skeleton shrimp…okay, at one-half to two inches in length, not scary at all; right? Unless, you happen to be a male skeleton shrimp of the species where females kill their partners after mating by injecting them with venom from a specially adapted claw. Skeleton shrimp belong to a group of amphipods that consist of around 80 genera and many more species. Named for their linear, angular appearance, they typically exist by clinging to seagrasses, bushy bryozoans and other substrates, with grasping appendages. Some are filter feeders but others lay in wait for tiny prey such as smaller amphipods and protozoans. Similar to our local blue crab, these smaller cousins can only mate after the female molts and is in the “soft-shell” stage. Hey, I bet a skeleton shrimp would be a lot scarier if they grew to the size of those inflatable tube-men you see at the used-car lots.

There are many more ocean creatures than the ones featured above, with scary-sounding names. If you really want to ramp up the “scare-factor” for the season, spend some time researching this list for fun: goblin shark, ghost anemone, fangtooth fish, dragonfish, coffin fish, bat fish, viperfish, and hagfish. It is guaranteed to make you tremble with amazement at the incredible diversity of adaptations for survival that have inspired their fearful names.