Road Kill Snakes: What a Shame 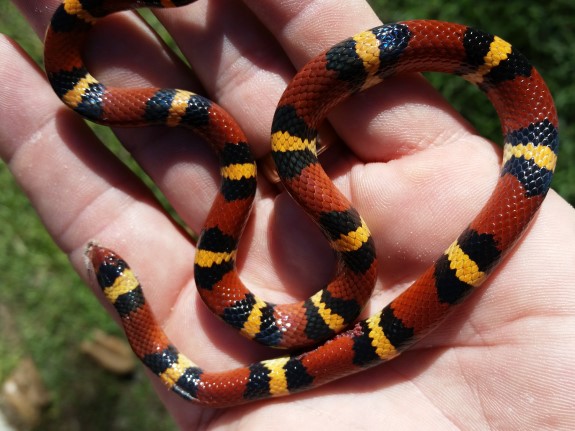 Snakes are some of the coolest animals on the planet but I’ll admit to something right up front; when a snake surprises me, I still jump, often. Even if I seem composed on the outside, something inside me almost always jumps. It does not matter if it is a venomous species or not. In spite of my basic understanding of and great appreciation for reptiles, snakes connect with a primal instinct that shouts “lookout” at some subconscious level. This human character trait is most-often the undoing of many an innocent serpent, happily going about its business when, WHAM, lights out. When a snake dares touch the human subconscious, our first emotion is often shock or fear; then perhaps anger; and in the end, payback for the offense. Many a good snake has met a very bad end when it has surprised a person. Shock and fear are powerful emotions and I can almost (not totally) understand the outcome described above when someone is honestly shocked by a snake’s unexpected appearance. Nevertheless, even my wife, during a shocking encounter with a 5-foot oak snake while collecting eggs in the chicken house, was able gather her wits and shoo the critter out of the coop with a stick, rather than kill it. She did have me go the next evening to get the eggs though. The one thing I have no empathy for however is when folks go out of their way to kill a snake that is trying to cross one of our roadways. About 90% of the dead snakes I see on the road are so close to the edge of the pavement that they were easily avoidable. C’mon people, that should be a “snake-safe” zone. These animals are likely never to encounter a human as they go about their business, performing important ecological functions in their natural habitat. Their great misfortune was that they had to cross an asphalt corridor used by humans. How about providing the same courtesy that most folks do when they see a turtle on the highway. I see my share of cottonmouths smashed on the road (and that’s a shame too in my book) but other flattened species I’ve encountered include mud snakes, rat snakes, garter snakes, ribbon snakes, water snakes, racers, scarlet kingsnakes, green snakes, and many more; all harmless creatures. Recently, I stopped to look at a nice 4-foot coachwhip; a beautiful specimen, except for the fact that it was dead. I get a thrill in seeing a living snake and having the chance to marvel at its form, function and beauty. If you ever have the chance to look closely at a pygmy rattlesnake in the wild (hopefully not in your turkey blind) you will be blown-away by its magnificent beauty. Black, velvety blotches on a gray background, with a rusty stripe running down the middle of its back. Same thing for a large diamondback rattlesnake (from a respectable distance). These have been some of my favorite natural encounters in the woods of North Florida, where we are truly blessed with a diversity of amazing animals and yes, super-amazing snakes. We should always use common sense of course when roaming the woods and enjoying our wild encounters, i.e. don’t ever catch venomous snakes (not worth the thrill), keep your hands out of hidden places, and watch where you put your feet. Oh, and work on cultivating a “live and let live” attitude when it comes to our scaly friends on the highway. They will oblige likewise.