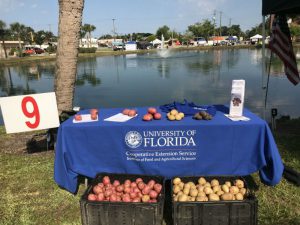 Commerce at the Bunnell Town Hall on Saturday, May 18th. UF/IFAS Agriculture Agent, Wendy Mussoline, donated over 600 pounds of red, white and blue-flesh potatoes to the event. Potatoes were grown and harvested at the UF/IFAS Hastings Agriculture Extension Center, where researchers are busy determining the best varieties, most efficient spacing, and most effective pesticides for both tablestock and chip potatoes grown in the Tri-County Agriculture area. The potatoes are perfectly safe to eat and are generally donated to local food banks in the area. Both white and blue-flesh varieties were made into skinny french fries and sold by the Chamber at the event. 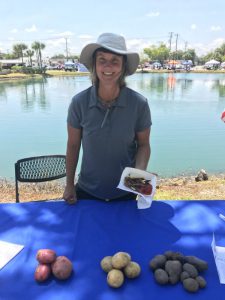 The “Adirondack Blue” variety, which appears more like purple to me, were a big hit at the french fry stand as well as in the cooking contest. One of the winning dishes was a potato salad prepared with the blue potatoes. I repeatedly had to explain that the there was no dye added to the Adirondack Blues to make them blue (or purple). They were bred and released by potato breeders in Cornell in 2003 using two parent varieties, namely N40-1 and NY96. They keep their brilliant color even after frying or boiling and make a wonderful spectacle and delicious alternative on the table as mashed potatoes.

The UF/IFAS Extension booth had plenty of potatoes to give away to the public. The home-grown folk were fairly knowledgeable about the prevalence of potatoes in Flagler County, especially since it is the emblem o 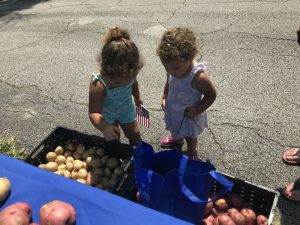 n our County seal. However, it was a great opportunity to share about crop production, modern harvest technologies and economic impacts of agriculture with the public, particularly with those that are new to our community. The kids certainly enjoyed filling their UF/IFAS gator-blue cloth bags with potatoes, and parents were eager to try a few of our special recipes that offered unique potato concoctions. It was the perfect educational opportunity to share the wealth of our potato crop and bring awareness of the importance of agriculture within our community.