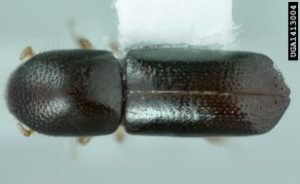 The Red ambrosia beetle (RAB), also known by the scientific name Xyleborus glabratus Eichhoff, is believed to have come into the country in wood packing material and was first detected in 2002 in a survey trap in Port Wentworth, Georgia. The beetle was later detected in Florida in 2005 in the Timucuan Ecological and Historical Preserve located in Northern Duval County. In 2012, RAB was detected in the northern reaches of the Florida’s avocado production area of the state in Miami-Dade County. By 2014, the beetle had spread to 48 Florida Counties. The spread of RAB and the pathogen it is associated with has been unintentionally aided by human movement of infested firewood. RAB has also been detected in Alabama, Mississippi, and South Carolina and continues to spread. .

Ambrosia beetles normally play an important role in decomposing decaying wood material in forests.The beetles live in a symbiosis with ambrosia fungi from which they get their name. Florida has both native and an invasive species of Ambrosia beetles which range in color from light brown to black and are about 2 mm in overall length. These beetles are fungus farmers because their only food source is ambrosia fungi that grows in the boring galleries of the host-tree’s xylem. Redbay ambrosia beetles transmit the causal agent of laurel wilt, Raffaelea lauricola. Mature beetles carry the fungus with them in sacs above the mandibles. Laurel Wilt transmission occurs when adults bore into new healthy host tree trunks. Unlike many species of ambrosia beetles that are considered beneficial, RAB attacks healthy trees in the Laurel family which includes Florida natives redbay, swampbay, sassafras, spice bush, and introduced trees including camphor and avocado. The redbay tree has been the most adversely affected which leads researchers to believe it to be the insect’s preferred host. When there are no redbay trees in an area the insect will attack other relatives in the Lauraceae family which also die. To avoid spreading the disease, don’t move infested firewood and dispose of dead infected trees locally. There are protective injection treatments performed by tree professionals which can be expensive are not always effective. Laurel wilt has significantly impacted Flagler County for a number of years. Most redbay trees near the coast have already been affected.

It is interesting to note that I personally have seen some redbay trees that appeared dead and are now sending up sucker shoots from the old roots. It may be that the insect selects larger trees that present a suitable home for infestation leaving many smaller trees untouched. We may not have totally lost the redbay trees, but we may not ever have the large specimens that grew here only a little over a decade ago.

Sol Looker is the Residential Horticulture Extension Agent and Master Gardener Coordinator at the Flagler County Extension Service, University of Florida. For more information email him at lookers@ufl.edu