Situation: In many parts of the United States, freeze tolerance of warm season turfgrass is measured by survivability of the turf. In Florida, it is purely aesthetic. Many homeowners desire a non-dormant grass during the winter. While frost events are relatively common in Osceola County, freeze events are rare. On January 21, 2019 the air temperature at 60 cm was below 0o C for a duration of 3 hours. Methods: Four species of warm season grasses were used with two cultivars of each species. St. Augustine: Floratam, Bitter Blue; Bermuda: 419, Celebration; Zoysia: Empire, JaMur; Bahia: Argentine and Pensacola. There were four replications. After the freeze event, aerial photographs were taken four days post freeze event. A numerical value was assigned to each plot based on aesthetics (with one being brown to ten as aesthetically pleasing). Results: Floratam sustained the least injury with a mean score of 6.75, followed by Bitterblue a visual score of 5. The Empire and JaMur scored 1.875 and 1.68 respectively. Argentine and Pensacola scored at 1.68 and 1.43 respectively. The turf that was the least appealing was 419 with a score of 1.31. Conclusion: St. Augustine withstands the freezes in Florida well while retaining the characteristics that homeowners desire. It is very interesting that 419 Bermuda, one of the most popular athletic turf varieties performed so poorly. This dictates the need for overseeding with ryegrass if a green turf is desired. More research on 419 and the interaction with ryegrass is needed to determine the economic feasibility of overseeding. 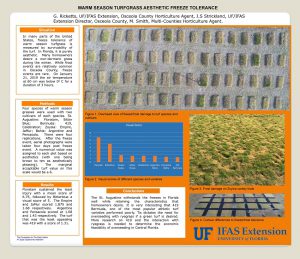