Situation: AARP reports one in eight Americans who are over the age of 65 are the fastest growing segment of the aging population. According to the 2010 U.S. Census, in 2030 one in five Americans will be over 65 and by 2050 our nation’s elderly population will more than double to 88 mil¬lion and the frailer population (85+) will quadruple to 19 million. With expected societal and economic changes, resources become even more limited for older adults. A lower standard of living will become the norm for some, especially for those seniors living on fixed incomes for twenty or more years. As we age, need and vulnerability increase, concurrently familial support and financial resources decline. Challenges facing this potentially vulnerable population include chronic and/or terminal illness, rising health care costs, loss of loved ones, inadequate nutrition, and housing transitions. Older adults will benefit from learning how to successfully meet health, psychosocial, and financial challenges to maintain well-being in later life. Methods: Four Family and Consumer Sciences Extension faculty constructed a six-part educational series to meet the needs of this targeted client group. The series was piloted in six two-hour sessions in fall 2018. Participants explore, discuss, plan, and modify behaviors around aging challenges with greater self-determination. Topics include downsizing, universal home design, healthy eating on limited resources, fall prevention, fraud, and advance directive planning. Results: At the conclusion of the series, faculty met to debrief and modify the series according to participant feedback. Subsequent series offerings are scheduled at the public library headquarters in the second county for spring 2019 and in conjunction with Elder Affairs in the third county in spring 2019. For this pilot series, aggregate data from the eighteen sessions will be collected and follow up data is forthcoming. Conclusion: This series can help aging adults learn self-sufficiency well into their eighth and ninth decades of life by allaying forthcoming challenges. 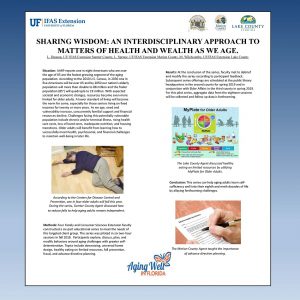