Situation: The recreational bay scallop (Argopecten irradians) fishery represents an important contributor to the suite of marine-related activities on the Gulf coast of Florida. Recreational scallopers generate economic activity through local expenditures for fuel, lodging, supplies and other goods and services. A previous study found that this fishery contributed $1.6 million dollars in annual economic impact to the Citrus County economy (Stevens, et al., 2003). As the Florida Fish and Wildlife Conservation Commission has continued to monitor and support the fishery, recreational scalloping has increased in popularity over the past few years. This popularity has led to increased numbers of scallopers and trips, which has likely further increased the economic benefit to the respective coastal corridor where recreational scalloping occurs. Extension, research, and active management of this fishery helps ensure the sustainability of the resource. Methods: Public workshops were held prior to the opening of recreational scalloping season. Participants were informed about bay scallop biology, management, regulations, and harvesting best practices. Additionally, personal interviews were conducted at local boat ramps during the season to collect information about resource users. Ramp data was incorporated into the IMPLAN input-output analysis software and the associated economic impacts were measured. Results: A follow-up survey of workshop participants (n=41) regarding behavior change was conducted and 18 responded (44%). All respondents made at least one behavior change during the season and implemented these changes during 44 scalloping trips. The IMPLAN model found that the $508,000 in-county expenditures generated $413,000 in labor income, $646,000 in value-added GDP, and $1,146,000 in industry output for Hernando County during the 2017 recreational season. Furthermore, nearly 20 jobs were supported. Conclusion: Recreational scalloping in Hernando County is of benefit to the local economy. Education is important to ensure that the stock is sustainably managed and those participating are using best practices. 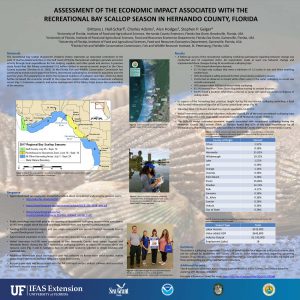