Situation: The diamondback moth (DBM), Plutella xylostella (L.), is one of the most damaging pests of brassica crops worldwide and is notorious for developing insecticide resistance. DBM has been a pest in Florida since 1883 and is now found in all cabbage producing areas of North America. In spring 2016, growers reported uncontrollable DBM populations across the state, and this widespread failure of chemical control suggests resistance development. It is customary in resistance management to avoid applying the same mode of action to successive generations of the same pest. The “treatment window” approach uses the average life cycle of pests to determine the time span in which modes of action should be alternated. Four-week treatment windows may be used to design insecticide rotations for DBM management. A fundamental question in chemical control of DBM is optimal placement of diamide and biorational insecticides in the rotation because these materials interfere least with the activity of parasitic wasps that attack DBM larvae and pupae. Methods: Insecticide rotations were evaluated at UF/IFAS Hastings Agricultural Extension Center in fall of 2016 – spring 2018. Three eight-week rotations were compared for the management of the DBM and other larvae attacking cabbage and collards. Trials compared rotations of the systemic diamide chlorantraniliprole with Bacillus thuringiensis, the insect growth regulators novaluron and diflubenzuron, and a grower standard containing methomyl. Rotations were evaluated based on suppression of the DBM and other Lepidoptera, enhancement of parasitism and plant damage. Results: Worm counts and plant damage ratings were higher for plots receiving the grower standard insecticide rotations when compared to the other rotations in the trials evaluated from fall 2016 – 2017. Conclusions: Results will contribute to improved management of the DBM and other caterpillar pests attacking brassica crops in Florida and beyond. 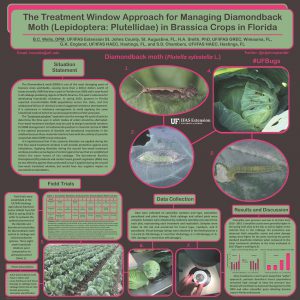