I grew up on a Pennsylvania dairy farm before studying animal sciences and working as an Extension agriculture dairy agent. Needless to say, I’ve been around a few cows over the years.

So when I was “drafted” to represent the University of Florida at the recent Sunbelt Ag Expo in Moultrie, Georgia, in the cow milking competition, I felt prepared but still a bit nervous. I was competing against other leaders from southern land-grant universities. The task: I was called upon to represent the great state of Florida and the University of Florida. Our pride was on the line. Moreover, multiple people, including my wife, said with all of my experience it would be a real shame for me to lose!

I’m proud to say that I won that milking contest and, I might add, in a handily way! It was a lot of fun, and yes, there was a strong sense of pride about representing our state and our university. I was also very proud to represent our ag/dairy industry, which has meant so much to me and framed who I am today.

But most of all, I was proud to represent our UF/IFAS Extension agriculture agents who do a tremendous job each and every day serving Florida’s dairy producers and cattle ranchers.

This was never so evident than during Hurricane Irma recently. Dairy cows really don’t care if the wind is blowing at 100+ mph or rain is coming down sideways. They still need to eat and still need to be milked.

Here’s an excerpt from a recent UF/IFAS news release that shows just what I mean, illustrating how one dedicated Extension agent helped avert a crisis:

As Hurricane Irma barreled toward Florida in early September, she threatened to starve thousands of dairy cows by delaying the “grain train” — two dozen freight cars of feed commodities bound for the Lake Okeechobee area.

Larson serves farms in the southern region of the state around the Lake Okeechobee area, which is a major dairy producing area for Florida. On the weekend of Sept. 2-3, farmers from several South Florida counties awaited an overdue weekly rail delivery that included 26 carloads of ground corn, soybean meal, cottonseed meal and other commodities that would be blended with vitamin and mineral supplements to produce nutritionally complete feed. Many dairy farmers rely on local feed mills to blend their feed, although some handle the task themselves.

Dairy farmers try to keep five to seven days’ worth of feed on hand, and they need the mills to have enough commodities to blend feed for another five to seven days. Lactating dairy cows are typically fed twice daily and may consume 50 pounds of feed each time.

When the “grain train” had not arrived by Monday, Sept. 4, Larson took action through the State Agricultural Response Team (SART), a partnership between government agencies and non-profit groups that coordinates disaster response for agricultural and livestock operations in Florida. Additionally, UF/IFAS Extension is a core partner of SART.

Larson’s UF/IFAS Extension duties have acquainted her with producers and dairy industry personnel across Okeechobee, Highlands, De Soto and Hardee counties. So to help SART address the “grain train” crisis, she traveled to local feed mills and spoke to employees about their current feed reserves and customers’ potential needs. Information she relayed to FDACS colleagues, together with first-hand accounts from dairy farmers who called Tallahassee, confirmed the 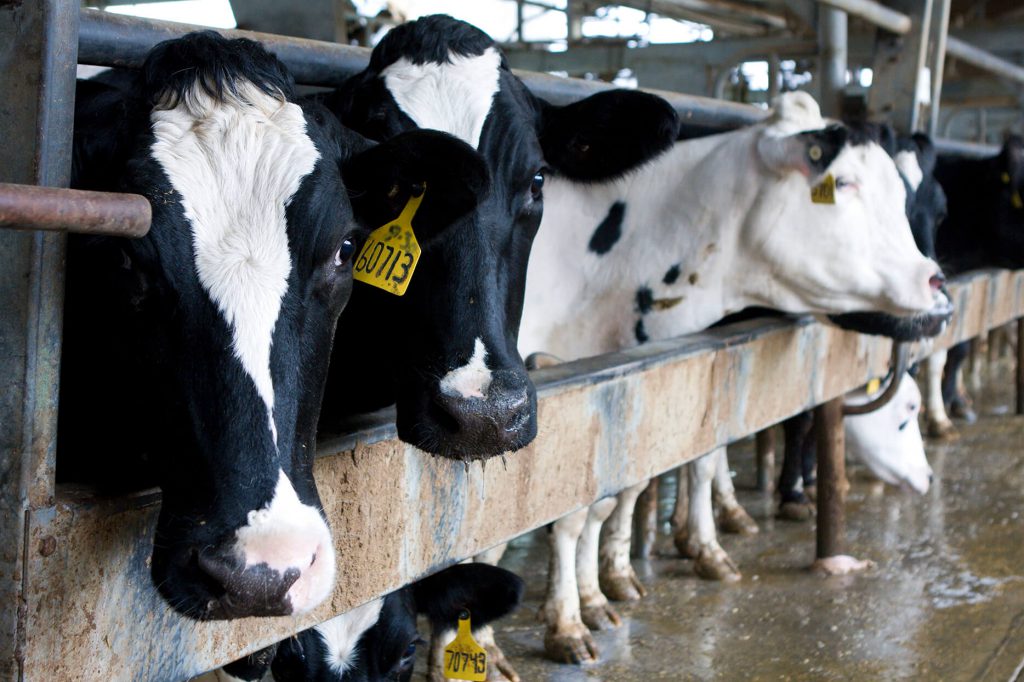 gravity of the situation and helped inform state officials who sought to intercede on the dairy producers’ behalf and ensure that the commodities arrived.

As the week wore on, Hurricane Irma made rail transportation increasingly dangerous. Power outages made it necessary to dispatch crews to supervise railroad crossings because automated equipment was not functioning.

On the evening of Friday, Sept. 8, the “grain train” arrived in the Lake Okeechobee area with enough time to blend the feed and get it transported to the farms that needed it.

Larson predicts that Florida dairy cows affected by Hurricane Irma will probably see a temporary drop in milk production of 25 to 30 percent. However, if the rail shipment had not arrived, milk production among the feed-deprived cows would instead have dropped by 50 to 70 percent, she estimates.

Congratulations to Colleen and her colleagues on a job well done! What a great example of leadership, responsiveness and proactively dealing with an issue that could have been highly detrimental for numerous farms and thousands of dairy cattle. I know those dairy cows would say “thanks” if they could.

This success story illustrates how UF/IFAS Extension works collaboratively with state agencies and organizations — not just during crisis but every day of the year.

Representatives of the Florida Cattlemen’s Association, Florida Farm Bureau Federation and the Florida Feed Association, Inc. also contributed to relief efforts for Lake Okeechobee-area dairy farms. Other participating agencies included the National Milk Producers Federation, U.S. Department of Agriculture, Federal Emergency Management Agency, National Transportation Safety Board and American Farm Bureau Federation. Collaborations such as these are critical to the work we do in Extension and enable us to bring great significance to the people we serve every day.