I have written about the horseshoe crab before but this weekend I had a chance to attend a training on how to tag these animals. This is an “ancient mariner”. There are fossils of this guy dating back over 400 million years and they have changed very little in that time. They certainly have seen a lot – including the decline of the dinosaurs. Through it all, they have held on… until now. 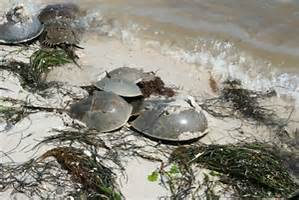 There numbers have declined in places they historically were very common. There are four species of these guys found around the world. Limulus polyphemus is our guy. They are most known from Delaware Bay where, during spring high tides, they approach the beach in the thousands to fertilize and lay eggs. Smaller males show up first, hanging around waiting on the larger females to approach the beach. They follow her grabbing the back of her body with a fist like claw. Many times, there will be several males hanging on hoping to be the one who will fertilize her eggs. She approaches the beach during the highest point of the spring tide (during a new or full moon) and lays her eggs in the sand close to the water. The males will try and fertilize them as she does. In some parts of Florida, the aggregations are more common in the spring, for others it is the fall.

The number of crabs approaching the beach during these cool events are declining in much of their range. In some cases, they are collected to use as bait. Others collect them for their blue blood – which contains a chemical compound that fights off bacterial infection and have been a wonder for the medical industry. In some cases, people do not know what they are but see them as dangerous or disgusting and toss them up on the beach to die.

Locally, they were once a common site, but they declined. The animal is rare in the Pensacola Bay area now, but sightings have been increasing. FWC has a program that tries to track sightings and nesting activity across the state to determine their current status. Florida Sea Grant is assisting by training volunteers to monitor beaches and tag horseshoe crabs they find. Which is what I learned this weekend.

What we need now are locations where these guys come up to lay eggs. In 2018, a female/male pair were seen in Little Sabine. Numerous sightings have been reporting from Big Sabine, particularly in November. There have been no reports of their nesting there, but they must be somewhere. We have received reports of individual animals or molts (their shed shells) near Deadman’s Island, Bayou Grande, and Project Greenshores. If you see these animals, please let me know. Rick O’Connor, Florida Sea Grant, Escambia County Extension, (850) 475-5230 ext 111, or roc1@ufl.edu