Skip Navigation or Skip to Content
Home » UF/IFAS Entomology and Nematology Department » Jeepers Creepers What Are All These Creatures? See Our New UF/IFAS Featured Creatures!

Jeepers creepers what are all these creatures? See our new UF/IFAS Featured Creatures!

It is that time of year when it seems that everywhere you look is an insect you have never seen before. To keep you in the know we have pulled together some of the newest Creatures from the University of Florida, Institute of Food and Agricultural Sciences (UF/IFAS) Featured Creatures Website. These articles were developed by UF scientists, students, and collaborators and the excerpts below are from the actual article. If you do not see anything new to you here visit the website and look around for information on a few Creatures to add to your mental toolbox.

Excerpt from the article: Tuliptree scale, Toumeyella liriodendri, is an important soft scale insect pest of tuliptree (Liriodendron tulipifera L.) and other species in the family Magnoliaceae. It is most damaging to very young trees. Scale insect feeding removes tree sap, reduces vigor, distorts growth, and sometimes causes death. Their damage is further compounded by the large amounts of honeydew they produce, which facilitates sooty mold growth. Tuliptree scale is widely distributed in the eastern United States. 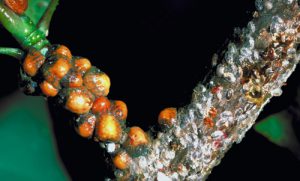 Excerpt from the article: The longtailed mealybug, Pseudococcus longispinus (Targioni Tozzetti), is a widely-distributed pest that feeds on many economically important hosts, particularly tropical fruits and ornamentals. This mealybug gets its common name from the two long, waxy filaments protruding from the last abdominal segment of adult females (Figure 2). This characteristic helps distinguish it from other mealybugs that may feed on the same host plants, although these long filaments sometimes break off. 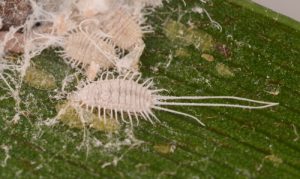 Excerpt from the article: Native to the Neotropical region, Aleurotrachelus trachoides Back, commonly known as the solanum or pepper whitefly (Figure 3), is an emerging pest of pepper and many other horticultural crops in the United States. It has been in the United States for more than five decades as an intermittent pest of pepper although, until recently, was never considered a key pest of economic importance. However, in the past few years, records of its spread and damage have been reported from private residences and nurseries throughout Florida. Feeding by this pest can cause stress to the plant by removing nutrients and water. Additionally, the feeding exudates excreted as honeydew also promote the growth of black sooty mold. 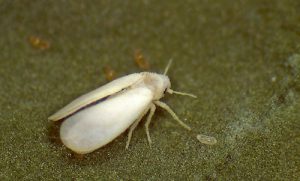 Excerpt from the article: The pillbug, Armadillidium vulgare (Latreille), is an isopod, a type of non-insect arthropod also known as a terrestrial crustacean. It is sometimes called a roly-poly due to its ability to roll into ball when disturbed (Figure 4). This defensive behavior also makes it look like a pill, which is why it is sometimes known as a pillbug. The name woodlouse is used for both pillbugs and sowbugs in Europe and refers to where these arthropods are found, such as under logs. Pillbugs are nocturnal, though they may be found during the day in the soil or under debris. They are mainly beneficial in the garden or landscape, but can become occasional pests if they wander indoors. 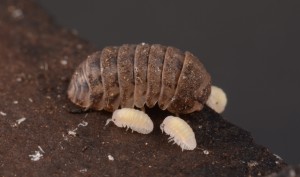