Skip Navigation or Skip to Content
Home » UF/IFAS Entomology and Nematology Department » What Is This Bug? It Is Time To Explore Tiny But New UF/IFAS Featured Creatures!

What is this bug? It is time to explore tiny but new UF/IFAS Featured Creatures!

Are you seeing fantastic creatures that are the stuff of nightmares (or an entomologists day dreams)? We all have had these moments and can often be surprised by how small some of these so called evil creatures are. We have compiled for you some of our newest articles on tiny insects (that may or may not be pests) so you can be ready for the close encounter you have.

We are proud to present you these newest Creatures from the University of Florida, Institute of Food and Agricultural Sciences (UF/IFAS) Featured Creatures Website. These articles were developed by UF scientists, students, and collaborators and the excerpts below are from the actual article. If you do not see anything new here visit the website and look around for information on a few Creatures to add to your list tiny insects you recognize.

Excerpt from the article: The winter ant, Prenolepis imparis (Say), is a widespread North American ant that is common across the United States. Sometimes called the false honey ant, this dominant woodland species is most active during cool weather, when most other ant species are less likely to forage (Figure 1). This species is one of the few native ants capable of tolerating competition with invasive species, and it persists in areas invaded by the Argentine ant, Linepithema humile. This species accomplishes this by foraging when many invasive species are inactive, and they are also aggressive toward other ants and produce abdominal secretions that are lethal to Linepithema humile. Prenolepis imparis is ecologically important as a seed disperser, and has been observed dispersing seeds of herbaceous plants in the southern Appalachian Mountains. 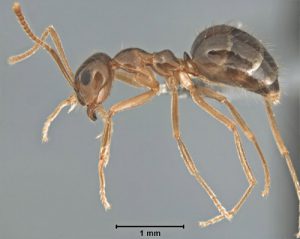 Excerpt from the article: The striped mealybug, Ferrisia virgata Cockerell, is a small insect that is a pest of a broad range of plants (Figure 2). It has been unintentionally introduced across the globe through international trade. Mealybugs are sap-feeding insects that tap into the phloem via a piercing, straw-like mouthpart known as a stylet. Severe infestations of mealybugs can be fatal to a plant. Large populations of mealybugs appear as accumulations of white, cottony-looking wax on the plant. This wax is produced by special glands and gives the insects the “mealy” appearance from which the name “mealybug” is derived. 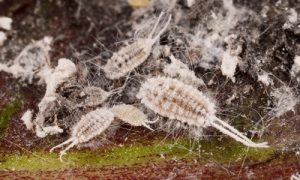 Excerpt from the article: The fourlined plant bug (Figure 3), Poecilocapsus lineatus (Fabricius), is a common garden pest found throughout much of the United States and Canada east of the Rocky Mountains. It causes distinctive feeding damage on an enormous range of plants, but most often damages ornamentals in the mint (Lamiaceae) and composite (Asteraceae) families. Nymph and adult stages are active for a relatively short period during late spring and early summer. These insects overwinter as eggs deposited in tender stems of early-season plant growth. For unknown reasons it appears that populations naturally fluctuate, causing periodic outbreaks for one or several seasons. 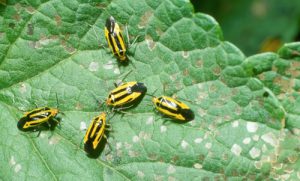 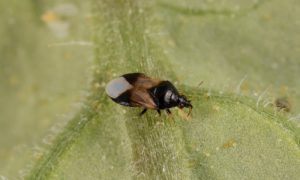