Skip Navigation or Skip to Content
Home » UF/IFAS Entomology and Nematology Department » What Is This Mosquito With White Feet?

What is this mosquito with white feet?

We are pleased to announce a new article on Featured Creatures that will answer that question!

Take a sneak peek with this excerpt from the article: Psorophora ferox, (Figure 1) known unofficially as the white-footed woods mosquito (King et al. 1942), is a mosquito species native to most of North and South America. It is a multivoltine species, having multiple generations each year. The mosquito is typical of woodland environments with pools that intermittently fill with rain or flood water. Several viruses have been isolated from the mosquito, but it is generally not thought to play a major role in pathogen transmission to humans. However, the mosquito is known to frequently and voraciously bite people. 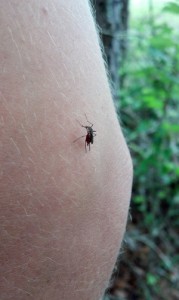