What’s the biggest bug in Florida?

For greatest body length, we’re confident that the title holder is Scolopendra alternans, commonly called the Florida Keys giant centipede or Haitian giant centipede. A really big adult can be somewhere in the neighborhood of seven to 10 inches long, based on Internet photos and video footage we’ve seen (and assuming that the material was labeled accurately). This species only occurs in far southern Florida — Monroe, Miami-Dade and Collier counties. Like other centipedes in the Scolopendra genus, S. alternans can deliver a nasty bite, so they are best left alone. On the plus side, these centipedes are relentless pest control agents, consuming small insects such as cockroaches and beetles as they crawl about in the spaces under rotting logs, rubbish piles and the like.

For greatest mass, we’re less certain about the title-holder. Our centipede friend Scolopendra alternans is probably in the running. We’d also like to weigh a really big example of the eastern Hercules beetle, Dynastes tityus and a female Carolina wolf spider, Hogna carolinensis. Of course, if you don’t mind being a bit looser with your definition of “bug” and will accept any land-dwelling arthropod as a possibility, then there’s a clear winner — the blue land crab, Cardisoma guanhumi, found in coastal areas in South Florida. A good-sized specimen can easily top 500 grams, about one pound.

For greatest wingspan, that distinction probably belongs to the state’s biggest butterfly, the giant swallowtail, Papilio cresphontes (Figure 1). According to this Featured Creatures document from the UF/IFAS Entomology and Nematology Department a big female specimen can have a wingspan of 7.4 inches. 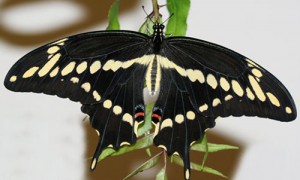 For a global perspective on the biggest bugs (also the smallest, the fastest, etc.) visit the University of Florida Book of Insect Records.