The blue morpho butterfly, also known as the peleides blue morpho or common blue morpho, is a brightly colored butterfly abundant in tropical environments in Central and South America. It can be seen flying in open areas such as paths, trails, forest edges, and rivers. In the United States, it is often featured in museums and zoos that have butterfly houses or butterfly rainforests. This five-page fact sheet about the popular butterfly was written by Haleigh A. Ray and Jacqueline Y. Miller and published by the UF Department of Entomology and Nematology, September 2015.
http://edis.ifas.ufl.edu/in1101 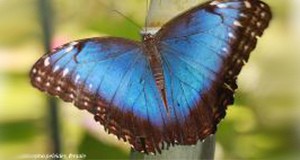 Diana Hagan is an information management specialist. She manages the collection of UF/IFAS Extension online publications known as EDIS and is journal manager for the EDIS online publishing service and archives.