Thistle: Terrible with a Capital T

Around March/April of every year thistle makes its presence known by shooting up stalks and flowering. The plant is low-lying for most of the year and often goes unnoticed, until now. Now that we know it is there, let’s look at how to manage it.

Eliminating thistle before it flowers is the best option, as one plant can produce 4,000 seeds. Most thistle plants in Florida will grow as low-lying rosettes for the first year and “bolt” (or flower) the second year. Elimination can come from hand pulling/mowing or chemical control. First lets identify the different stages of thistle:

This plant is hard to manage in Florida because of its long growth period, from January though August. Some plants may bolt and flower by April while others may not even start bolting until July. This variation in growth from plant to plant makes it harder to control as multiple applications, of any control method, is going to be necessary.

Hand cutting plants can be an effective way to manage small populations of thistle but it is time consuming. Mowing can be effective for small or relatively large populations of thistle but it must be done before the plant has flowered/produced seeds. Mow once the plant has bolted, but before it has flowered. Multiple mowing treatments may be needed since, as we mentioned before, individual plants will flower at different times of the year. Mowing the rosette stage is not effective as the plant has enough energy to regrow and still bolt/flower.

Chemical control can be a cost and time effective way to control a variety of plants. The rates below are for a broadcast application but for small populations spot spraying may be even more cost effective. Timing is critical when it comes to herbicide spraying. Spraying while the plant is still in the rosette stage will significantly increase the control of that plant, once thistle has bolted or is flowering the control drops significantly. Scout pastures multiple times a year to identify different weeds in their early growth stages, this will allow for sufficient control by using timely herbicide applications. 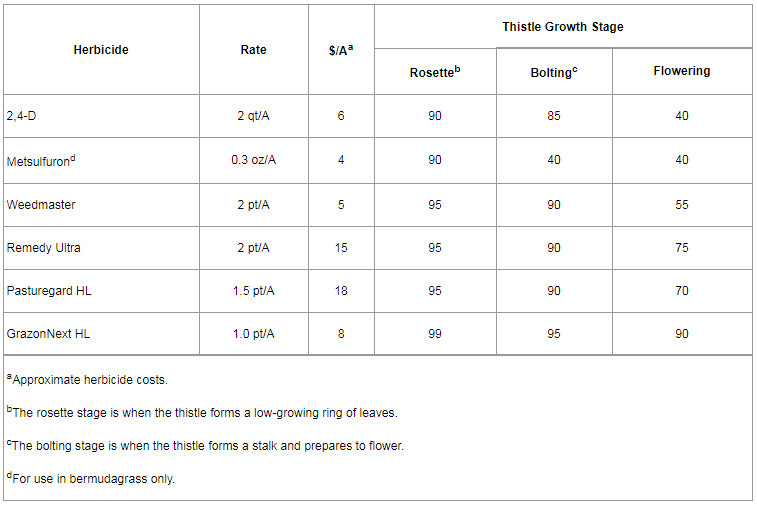