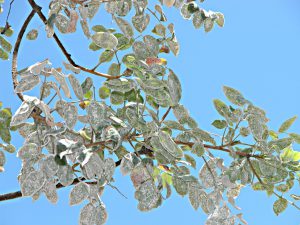 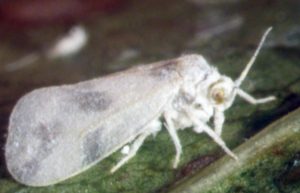 The Rugose spiraling whitefly is a mess-maker, but not a plant killer. It first appeared in SW Florida in late 2011 and seemed to cover everything that wasn’t moving and excrete much honeydew which resulted in sooty mold. Whiteflies were so abundant that dying whiteflies clogged pool filter screens. About 18 months later, they all but disappeared. I have been getting a few calls of it on coconut palms. See video and update below from Dr. Mannion. Do not spray pesticides on the foliage. Think IPM- integrated pest management- as spraying the foliage will also kill the “attack” insects which help reduce the whitefly populations. 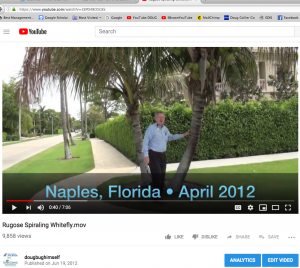 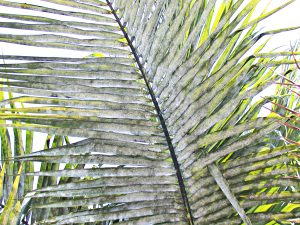 “All,
We are seeing outbreaks of rugose spiraling whitefly in Palm Beach and Monroe Counties. I believe that after a few years of low populations, the parasite’s have also dissipated which have now allowed some of these outbreaks. The good news is we have started sampling in some of these areas and are starting to see some of the the important natural enemies. I am restarting some whitefly colonies so we can rear the parasitoid and begin releasing to help jumpstart their populations.

I have not tested a trunk spray of Zylam on coconuts but did test Safari which is the same a.i. (dinotefuran), and it does work on the palms as did imidacloprid. We found the insecticide in both the old and new fronds after a drench, trunk injection, or trunk spray. Bare in mind that the amount of a.i. in Zylam is less (if I recall correctly it is half) than Safari so it would be imperative to follow the Zylam label. I have seen people use Zylam but at the rates that had typically been done in the past which are the Safari rates so you would only be putting out 1/2 the a.i. that you need for expected control.” 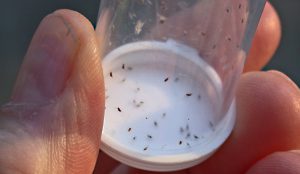 These little specks in the vial are the “microwasps” (Encarsia noyesi) reared in Dr. Mannion’s lab which helped squelch the whitefly outbreak back in 2013-14.