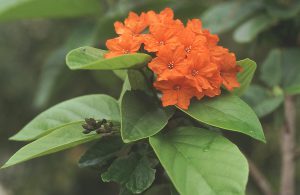 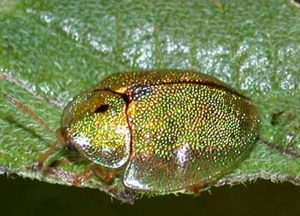 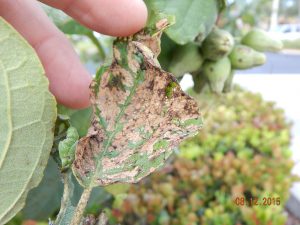 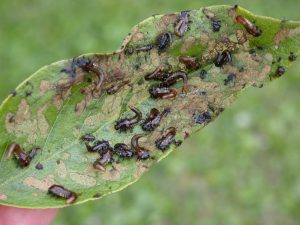 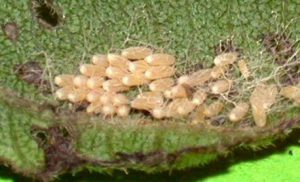 Egg cluster of the beetle (all photos by Doug Caldwell).

Geiger tree (Cordia sebastena) foliage is being chewed (skeletonized) by the ugly, gross larvae of the geiger tortoise leaf beetle Physonota (Eurypepla) calochroma floridensis. Damage in some years can be severe and distracting. It has overlapping generations and can probably be found almost anytime in south Florida.

Young larvae “team” feed or feed in a
group and skeletonize the upperside of the leaves. They also
feed on the flowers (Chaboo, 2004). The adults feed on the
margins of the leaves and contribute to the damage. The fruit
often looks pock-marked, probably from larvae or adults
chewing on them when they are small. The leaf beetles were
common each year, but not abundant enough to cause much
more than 20 to 30% consumption of the canopy. I remember
seeing a 30 to 35 ft Geiger tree on Sanibel Island in April
1991 that had been 90% defoliated. I would categorize this
beetle as a Category 2, no big deal nibbler, but as with most
insect populations, their numbers can swell and they may
cause considerable damage. This beetle has overlapping generations.

There appears to be at least 3 peak periods when larvae
are busy chewing away (mid-April, July and September) in
the Naples, Fla. area. It seems that one can always find a few
individuals of one stage or another all season long. Chaboo
(2004) reported finding adults, larvae and pupae on 20 Nov.
in Ft. Lauderdale in 2002.

Adults are ⅜ inch long and at first, after they
have freshly emerged from the pupal stage (callow adults),
they are a dull tan and black (beetle on right, at tip of leaf in photo). After the exoskeleton
hardens, it becomes a shimmering golden-green, attractive scintillating, sequin-like tortoise beetle (beetle on left and above). 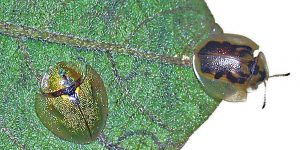 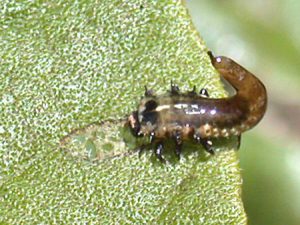 On the other hand, the larvae are disgusting looking.

Their bodies are covered with slime and feces.

Chaboo (2004) observed that, unlike other species in this Cassidinae subfamily,
the larva holds its abdomen vertically and “a constant stream
of wet feces dripped unto (sic) the head, thorax and abdomen.”
The larva is black-grey with a whitish stripe down the
middle of its dorsum (“back”). The lateral projections along
the pronotum and abdomen resemble small claws. The beige
eggs are deposited in clusters of about 25 to 40. Long white
filaments lightly cover the cluster. Each egg is about
1 mm long and 0.5 mm wide.

The Geiger tree (Cordia sebestena L.: Boraginaceae)
is the principal host. Other Cordia species, which are occasionally

found in the landscape, are not suitable for this beetle.
These include the white flowering, wild-olive (Cordia boissieri Lam.);

Soil-root drenches of imidacloprid may help (may take several weeks to translocate and get mortality), but only use when damaging populations (greater than 30% skeletonizing-chewing damage) occur. Avoid using systemics such as imidacloprid when bees are attracted to flowers. Foliar sprays of an insecticidal soap may reduce beetle populations (larvae and eggs). Contact UF|IFAS woody ornamentals entomologist(s) at TREC or Gainesville for management updates.