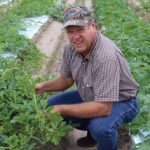 Much of the research conducted in this region of Florida has been with fertilizers. The focus is primarily on nitrogen fertilization and the quality of controlled release fertilizer. This fertilization technique is commonly used with turf and ornamentals, but there is interest in applying it to row crops. This project is mostly environmentally driven instead of economically.

Controlled release fertilizers consist of a granule of fertilizer coated with a polymer. Calling this type of fertilizer “slow release” is incorrect because the amount of time it takes for the fertilizer to be released depends on temperature, which means that the speed depends on the season. Manufacturers design the polymer coating to disintegrate at specific rates to control the release of fertilizer. Because this product is thoroughly researched and high quality, it can be expensive. This type of fertilization also can help prevent leaching, especially when it is being applied to undeveloped roots. The product shows promise as a flexible option for the BMP program and it is currently being tested with watermelon, carrot, and corn. 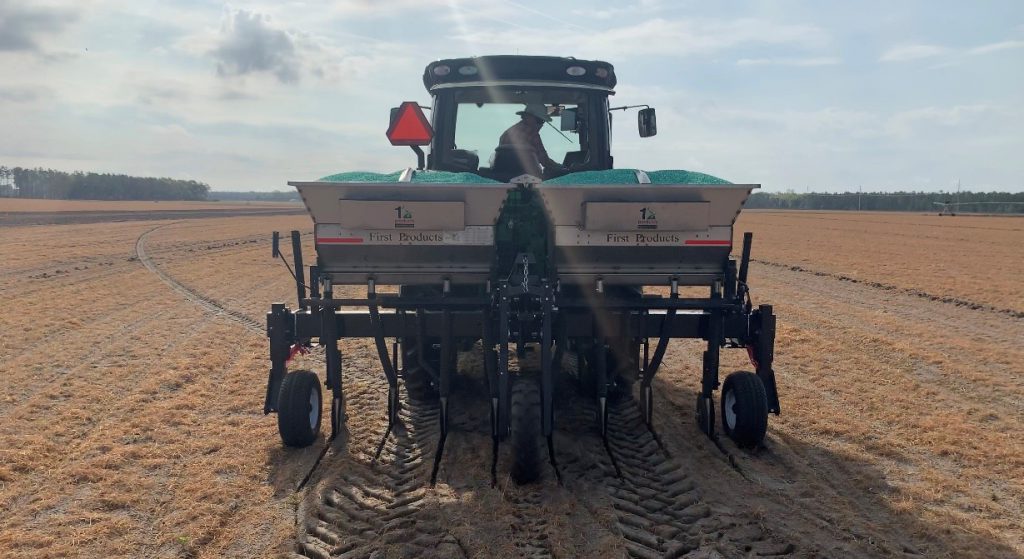 Although controlled release fertilizer has proven similar results to conventional fertilization, it is more expensive due to the cost of materials and the need to pay people to apply the fertilizer. Some savings may be enjoyed, but overall, this option is attractive because of its positive environmental impact instead of cost reduction.

Trials have also been conducted with carrots over the past year to identify whether controlled release fertilizer has any benefits. Similar to the watermelon trial, the marketable yields from the carrots were not statistically different between conventional and controlled release nitrogen fertilizer. Timing the release is also very difficult due to the long season and fluctuations in temperature. Leaching rains can also mean a difficult recovery for newly released nitrogen. As a result, the BMPs for carrots may need to include a leaching rain event clause with conventional or controlled release fertilizer programs. Fertilizer applications to the bed instead of being broadcasted is more efficient as well. More research on carrot fertilization is still needed. 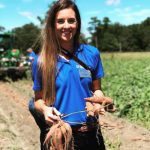 A preliminary study on grain corn yield and leaf tissue response to soluble versus controlled release nitrogen fertilizer sources began in 2019. The applied research trial started at NFREC, but now is being applied on a much larger scale at farm locations as well. Producers have increasingly become interested in having studies done on their farms. Even though there are not any current cost share programs, farmers enjoy benefits such as having strip tilling so that plants can be directly planted into fertilizer.

The controlled release fertilizer trial has objectives that align with the 4R’s:

The on-farm extension demonstrations allowed researchers to see if the results of the corn trials done at the research center would look the same when conducted on a farm. The fertilizer was applied with a 30-acre pivot, which kept the fields looking immaculate. The applicator cuts between the rows of corn and applies fertilizer. Runoff is unlikely because of the furrows.

The fertilizer treatments were applied using four different types of nitrogen sources. Soluble broadcast is the most conventional method. Soluble banded has a reduced rate of nitrogen and is water soluble. Two types of controlled release fertilizers were applied in different rates to compare them with the more conventional methods. The results showed that crops treated with the first fertilizer were the highest producers across all three treatments. The leaf tissue nitrogen concentration was also measured for each plant and they were all within adequate ranges. 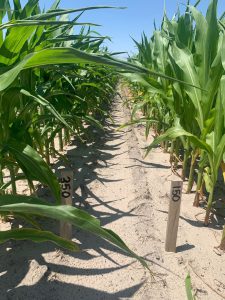 In terms of appearance for the corn treated with controlled release fertilizer, the plants treated at the 350 rate were the healthiest looking. However, weeds were much more prevalent in the corn treated at the 350 rate. Because rainwater leaching and other issues occurring during the season, the 150 rate corn was not as resilient as it usually would have been. This shows that customization is necessary to account for environmental setbacks. Overall, the results of the controlled release fertilizer were comparable to conventional fertilization practices.

Watch the recording of their presentation.

Q: What was the release curve of the control release fertilizer on watermelon trial 1 in months?

A: It would be about a 3-month period. We typically begin the release in the middle of March and then end in the middle of June, so it’s approximately a 3-month release rate that we want it to all be done, and the curve would be trying to match the crop nutrient requirement; so a little bit at the beginning, a lot more as you move into the harvest phase, and then less as you get into the first, second, and third harvests. So, it’s about 3 months, but in terms of weeks I think it’s in the rage of about 11 or 12 weeks.

A: That’s a really good question, and a really keen observation. There were periods when the nitrate levels were a little higher early in the season or middle of the season from the control release material, and I think that has a lot to do with just matching up the crop nutrient needs to the actual release rate. Remember last year we had very dry temperatures early in the season, and we may have just released a little bit more early, but we have no evidence that it was ever lost for either one of them. We know that there was root activity at lower depths – although there is not a lot of efficient root activity at the lower depths. The majority of the root system of watermelon is in the top 12-15 inches. So, I would say the data that we were able to collect on it would suggest that the plants were able to take up all of that, even the part that was down in the lower depths. We did not have any evidence that it was leached beyond that; we would have been able to definitively do that if we had another depth of 36-48 inches, but we did not have that.

Q: Has anyone looked at the effects of the polymer coating on the environment? Is there an environmental tradeoff between the amount of time it takes for the coding to be broken down versus the amount of nutrients released?

A: From a University standpoint, we haven’t investigated that further. I know the companies have information on that, and I know I’ve seen some information that’s been developed by one fertilizer company that describes that process, but we have not done any research on the long-term effects, and I think really, the long-term effects are just the first couple of years before the product may be broken down. In our particular area, there is very little runoff of these fields, so it’s highly unlikely that it’s going to move offsite. I think it’s going to be, in our Suwanee Valley area, contained in the field because of the low risk of anything moving offsite, but we have not done any specific research in regard to that.

A: I think from an economic standpoint maybe there is no reason to spend more money to get the same result at the grower level perhaps, but there is a lot of efficiencies in time and labor that come along with it. Let me address first that Kevin Athearn did the economic analysis on this – I think the proper term is a “partial budget” assessment of how that piece of the budget changes when you look at just the fertilizer part of it. There was a complete analysis done and Kevin is very complete in that. We gained information from the suppliers and farmers to feed into that economic analysis, and let’s say that in the end, we have some gaps where the control release material is still going to be more expensive to use, then I think the question that I find myself looking at is if this has a major environmental benefit to reducing leaching, then should that burden be put solely on the farmer or is there some public benefit to encourage farmers to utilize a technology that would reduce leaching and help them financially to make that transition – in other words to help incentivize, and I’ll use the term “cost-share” program – it may not be exactly like that, but is there an environmental benefit for us to go in that direction? For this region we’ve got to reduce nitrogen use by over 4 million pounds. Once we have the Suwannee area in an adopted BMAP (basin management action plan) area; the Santa Fe is already in that realm, we look at how are we going to accomplish that? We feel like we are going to accomplish it primarily with efforts in corn, maybe hay, maybe watermelons, maybe carrots, but we’ve got to try to do everything we can. So I think the question being asked from an economic standpoint is very valid, but there is an environmental component that has to have some intrinsic value here, and that would be the incentive to do more of this, not for every crop and every situation.

Q: The differences in nitrogen leaching would be key for defining cost-shared control release fertilizer. Is there any information on that?

A: Our trials are not really looking specifically at the leaching but there is a huge FDACS 17-year funded project here at the center under a 40-acre pivot that Charles Barrett is leading, and that’s where we’re going to be able to collect more of that data of what happens below 36 inches. It’s tough to do on a farm and it’s expensive, it’s unpredictable, but that’s where I think we’re going to get the data that help answer this question.

A: I pointed out on the grower’s field where the 150 did not appear to be optimal this year, but as you saw in the previous year, and it was exciting to me as well, that the 150 looked like it did the same as the 250, so very promising to see that. I’d like to explore that further and do smaller increments of rates and do that for more than one year. Maybe after the data comes out this year we’ll be able to see how the 150 looks in this location, but then also pursue that further to see how low we can go – maybe it’s 150 or maybe between 150 and the IFAS rate of 210 – but there needs to be more work done on that before we can hang our hat on the 150 rate, especially after what I have observed this season. Maybe we can talk about that and see what suggestions you may have for me.

Emily is the assistant director of communications for the Center for Land Use Efficiency. She communicates research and extension efforts and supports the Florida Master Gardener Volunteer program, Florida-Friendly Landscaping program, Program for Resource Efficient Communities, and Ag BMP programs. ...