Understanding the Relationship between Cold Weather and Fish Kills in Florida

Over the last couple of weeks I’ve heard from several citizens who thought their ponds were contaminated by chemicals because they have had several hundred fish die. What I found when I visited these ponds was that the dead fish were are all one species. Given our recent cold temperatures and the fact that only one species of fish was affected usually means it’s a cold weather-related fish kill. Chemical contamination would kill all species of fish in a pond. 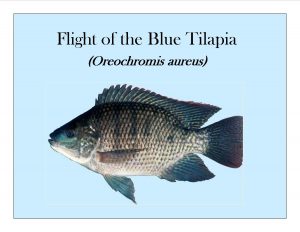 This year, we have record–setting cold temperatures. Our nighttime low temperatures have been very low, and our daily high temperatures have also been low. When this occurs, our water temperatures rapidly fall, often below the lethal temperature for many species. This combination of a recent history of mild winters combined with an unusually cold winter has resulted in large die offs of tropical fish such as the blue tilapia (pictured right). This fish has been the source of recent die offs in Clay County

If you would like to learn more about cold-induced and other types of fish kills, A Beginner’s Guide to Water Management – Fish Kills is a great publication! You can also report dead fish by calling the Florida Fish and Wildlife Commission’s fish Kill hotline at 1-800-636-0511.

Dr. Bradley Burbaugh is the UF/IFAS Extension Volusia County Director and his areas of expertise are leadership and economic development.