As I have written about in the past, Brunswickgrass also referred to as brown seeded paspalum, is becoming a growing problem in many perennial pastures in the southeast. Due to its physical characteristics brunswickgrass is highly competitive with both bahiagrass and bermudagrass. When the plant is young it may be grazed by livestock, but as it matures it quickly becomes rank and begins to lose its palatability, causing livestock to avoid grazing it. This distinctive trait in addition to the plants extensive rhizome system, gives it a competitive advantage in our summer perennial pastures and often times leads to it out performing desired forages, especially when overgrazed. As a producer, it is important that we become familiar with this problematic grass and also how to identify it.

Brunswickgrass is a warm season perennial grass with a very similar growing season to that of bahiagrass and also similar in appearance, especially during the vegetative phase. Due to the commonalities, distinction between the two grasses can be rather difficult. Below are images that can be used to differentiate between the two and help in properly identifying brunswickgrass.

Seed Head Comparison: One of the easiest way to identify brunswickgrass and differentiate it from bahiagrass is by the seed head. Brunswick typically has 3-4 racemes per seed head (pictured left) while bahiagrass has 2-3 (pictured right).

Seed Comparison: Brunswick seed is slightly smaller and darker in appearance compared to bahiagrass and when examined closely it has a noticeably convex in shape compared to the flat, tan Pensacola Bahia seed. 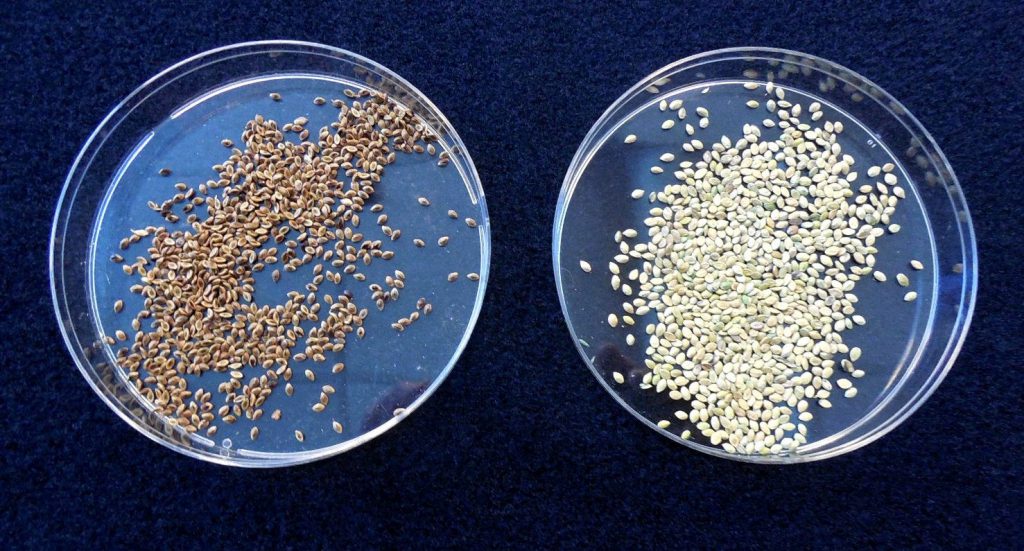 Root Comparison: Brunswick has a deep and aggressive rhizome system that is noticeably different when compared to that of bahiagrass. Brunswick rhizomes appear below the surface and spread laterally, while bahiagrass rhizomes referred to as stolons spread along the soil surface.