Bamboo palms (Chamaedorea erumpens) and many closely related species in the genus, are among the few palms that thrive in shade and low-light conditions. For this reason, they are widely used as potted indoor palms and in interiorscapes. Their adaptability to shade results from them being native to Central American rain forests. The lower half of their stems have a reedy appearance similar to bamboo stalks, thus the moniker ‘bamboo palm’.

Bamboo palms prefer moist, but well drained soil, and under ideal growing conditions,  can grow to 15 ft. tall, but this height is rarely achieved if grown indoors as a potted plant. Like many other shade-tolerant palms, Bamboo palms have a clumping growth habit with multiple stems arising from a central growing point.  Bamboo palms have been investigated by the UF/IFAS Assessment Invasive Species team for the potential to be an invasive plant, due to prolific bearing under ideal light conditions. At the time the assessment was done, Bamboo palms were listed as “not a problem species” and will be reassessed at 10-year intervals. Click on the links to learn more about invasive plants and Bamboo palms 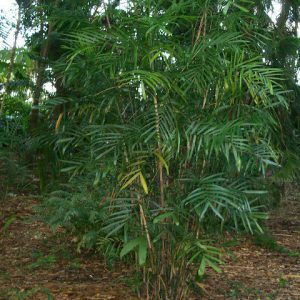 Scale insects and spider mites are the most common pests of Bamboo palms when they are grown indoors, and in waterlogged, over-watered soils, they can develop a bud rot.  Click on the links for more information on spider mites and bud rot

Because the old, spent fronds remain firmly attached to the reedy stems, these need to be pruned off regularly to maintain the aesthetic appeal of Bamboo palms. However, as mentioned in previous blog posts, because palms recycle nutrients from the older outer fronds to the newer inner fronds, when pruning palms, green fronds should not be removed. Pruning should be reserved for spent flower stalks, immature fruit, and brown fronds. Over-pruned palms are more susceptible to nutrient deficiencies, pests and diseases.

Click on the link to learn more about pruning palms.