Although many palms resemble trees, because they are not trees in the strict botanic sense, many palms have unique growth requirements. In this article we’ll review those for the Bismarck palm. 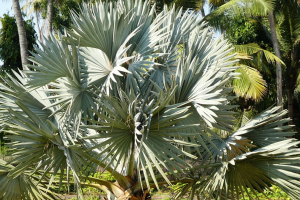 Bismarck palms may have a solitary versus clumping growth habit, but  because their crown can get up to 20 ft. wide, they should be planted with enough room to grow without interference from nearby structures. They also can get up to 70 ft. tall so it is important to note whether at maturity, they will get in the way of overhead utility lines because unlike true trees, palm canopies cannot be extensively pruned without adversely affecting the health of the plant. Click on the link to learn more about Bismarck palms.

Bismarck palms are particularly susceptible to palmetto weevil (Rhynchophorus cruentatus Fabricius) resulting in fronds turning brown and the eventual collapse of the entire crown. Click on the link for more information on the palmetto weevil. Although lethal bronzing disease in Bismarck palms has been occasionally reported, its occurrence is not as widespread as in other palm species such as the Canary Island date palm.  Click on the link to learn more about lethal bronzing disease.

Generally, over-pruning palms can make them susceptible to nutrient pests and diseases. This is especially true for Bismarck palms, as when pruned, they release response chemicals which tend to attract palmetto weevils. Additionally, because palms have unique nutritional requirements and they tend to recycle many of their nutrients from older growth to newer growth, over-pruning palms can also result in nutrient deficiencies. When pruning palms, only spent flower stalks, immature fruit, and brown fronds should be removed. Click on the link to learn more about pruning palms.