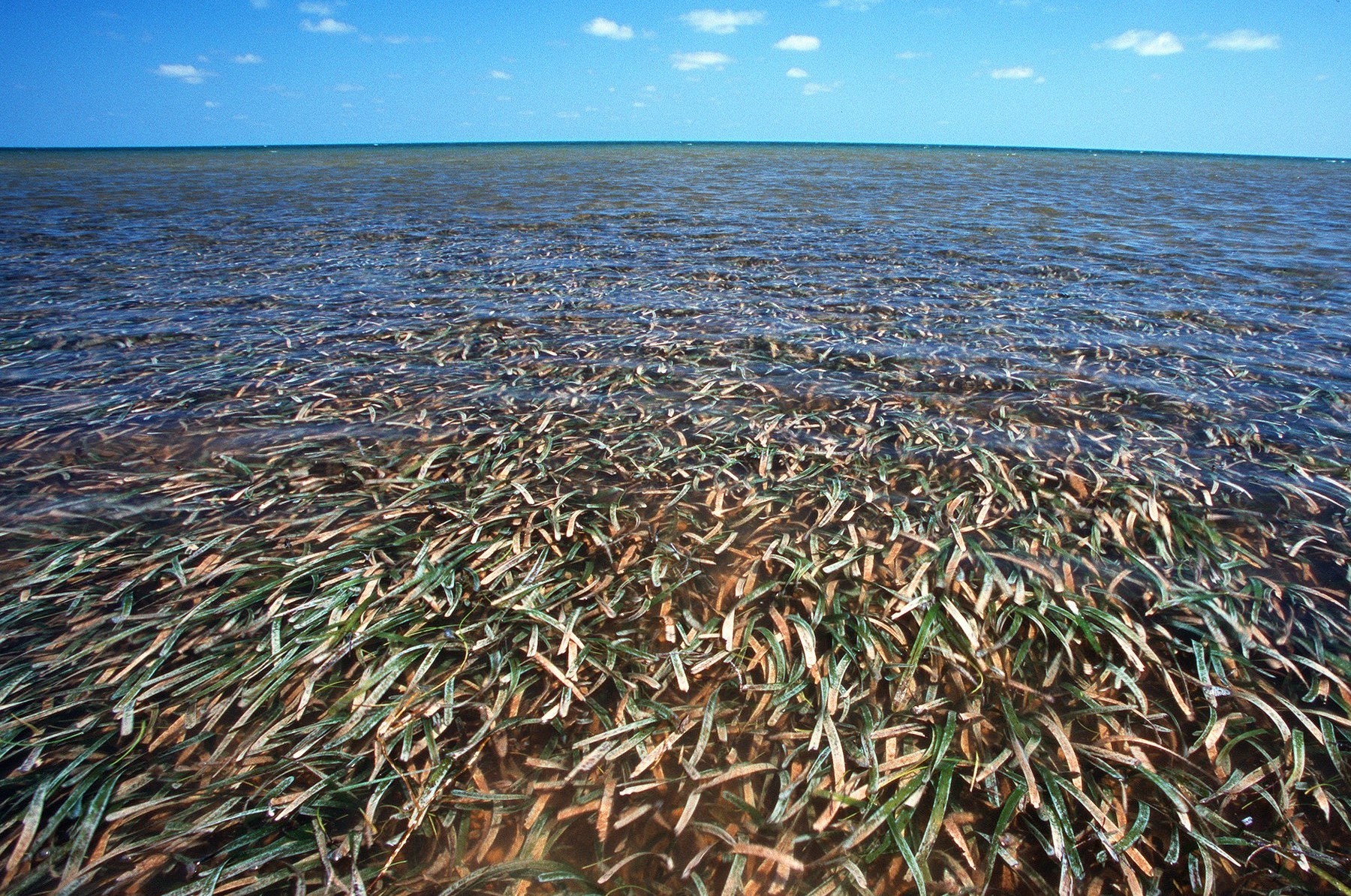 The Seagrasses of Charlotte Harbor

Seagrasses are flowering plants that grow underwater in marine and estuarine environments. In addition to flowers and their seeds, seagrasses, like plants on land, have roots and leaves that do different “jobs” for the plant… that is, the roots access nutrients buried in the sediment, while the leaves photosynthesize (convert sunlight to energy). Worldwide there are about 60 seagrass species. In Florida, seven species occur; six of these can be found in Charlotte Harbor. Each seagrass species has its own preferred salinity, light requirement, and depth. Some carry most of their biomass in their leaves and establish very quickly (pioneer species) and others carry most of it in their roots and grow more slowly.

What happens to seagrass in the winter? Each winter, anglers see a noticeable decline in seagrass abundance and become concerned that something bad it happening. Anglers are the eyes and ears of our estuary and as such have the ability to provide scientists with early warnings when something is not right. But, often what anglers observe in the winter months is simply seasonal changes. Seagrass abundance changes throughout the year. Peak seagrass growing occurs in the warm summer months. In the fall, seagrass growth slows and becomes dormant. Winter storms tend to cause old blades to sluff off, but fear not, the root systems are still alive. In the spring, new shoots sprout beginning a new growing cycle. During the winter months, seaweed (scientists call it macroalgae) may become dominant. This can be concerning, but it’s important to realize that in the winter, when seagrass is dormant, macroalgae are the primary photosynthesizers, providing vital food and energy to the estuary.

How are seagrasses monitored? Seagrasses in Charlotte Harbor are monitored in two ways. Since 1982, the Southwest Florida Water Management District has conducted aerial surveys to determine seagrass acreage within Charlotte Harbor. This is accomplished by taking photographs from an airplane flying at a known elevation, and then identifying regions of seagrass coverage in each image. In this way, researchers can estimate seagrass resources across a very large area in a short amount of time. In contrast a monitoring program conducted by the FDEP Charlotte Harbor Aquatic Preserves (CHAP) describes both where seagrasses grow, and how much seagrass is there. Twenty-six permanent underwater transects have been monitored annually in upper Charlotte Harbor since 1999. Think of a transect as a road with between five and fifteen locations spaced along its length. Each year, staff from the CHAP return to these precise locations – several hundred throughout Charlotte Harbor, Gasparilla Sound, Lemon Bay, and elsewhere — by getting in the water, with dive masks near the bottom, to estimate how much seagrass is present. Because of seasonal patterns in seagrass abundance, consistency in the season of monitoring is important. For the water management district it’s in the winter when water clarity is the best, and the aquatic preserves monitor in the summer when seagrass growth peaks.  The purpose of long-term resource monitoring programs such as the two mentioned above is to detect changes in the environment. On a good note, Charlotte Harbor seagrass have been stable to increasing in most areas over time.

What effect does red tide or storms such as Irma have on seagrasses? Red tide generally will not have a negative impact on seagrasses but can have a negative impact on animals that feed upon them if red tide toxins make their way onto the plant tissue. Likewise, seagrasses are resilient against storm damage. However, impacts can and have occurred. For instance, after Hurricane Charley, seagrass abundance dropped for a couple years. Of course, 2004 and 2005 were very wet years, so the impact was likely related to increased freshwater and decreased light levels. Recall each seagrass species has unique requirements so during this time shifts in species composition would have occurred. Studies that have looked at storm related sedimentation are limited, but in general sedimentation effects have been very localized. For instance, only one of more than 25 sites monitored in the Indian River Lagoon was found to have sedimentation impacts due to the storms of 2004 and 2005. One of the interesting phenomenon related to Irma was that the water left the harbor, and many anglers wonder what if any impact that had on our seagrasses. Some species, like turtle grass (the wide bladed grass) don’t like their blades to be exposed, but since much of their living biomass is in their roots, any impact from air exposure would likely be temporary.

What kind of seagrass restoration efforts have occurred in our area? Restoration efforts have included projects to improve water quality, projects to stabilize sediments, projects to encourage natural recruitment and direct plantings to re-establish seagrasses. A couple of the most visible restoration projects in our area have been the bird stakes in Turtle Bay and Lemon Bay. Bird stakes, generally constructed of PVC pipe with a wooden block on top that serves as a perch are often used to encourage seagrass to re-establish in areas damaged from prop scarring. Birds are attracted to the stakes and while they roost they poop in the water. Nutrients from the bird feces help to facilitate seagrass colonization into the damaged area. A more recent restoration project in Lemon Bay used sediment tubes (think of socks filled with sand) to stabilize a mile of prop scars. These tubes are marked with PVC pipes. The tubes bring the elevation up to the surrounding height making it easier for nearby seagrass to recolonize. These tubes have been in place a year and when I went out with the County’s natural resources staff in October to monitor them, so much seagrass had recolonized that you couldn’t tell where the scars were anymore. This project will be monitored for a couple more years but appears to be very successful.

Of course, great restoration success does not make prop scarring OK. Seagrass beds are essential nursery and feeding grounds for many sport fish species. And scars hurt. So, let’s be seagrass safe. Happy 2018!

← Charlotte Harbor: And how it was formed
Can you grow a coconut palm in Charlotte County? →