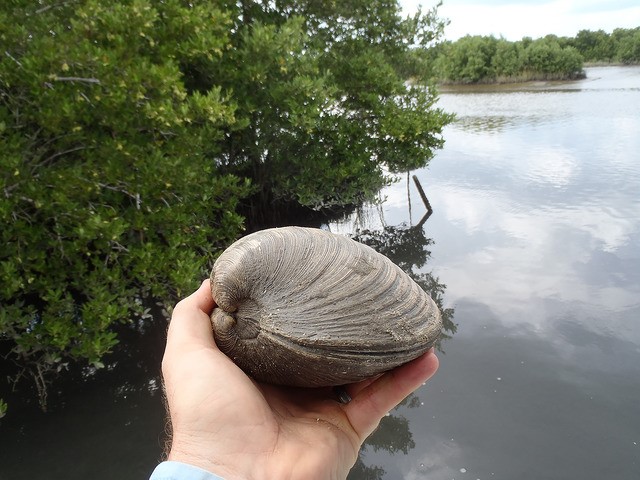 It has been a bad year for red tide throughout southwest Florida. The bloom we’ve been experiencing started last year around September and has persisted since. Blooms lasting this long are not unheard of and actually scientists have recently made some correlations between severity and duration of red tide blooms and the position of the loop current. That’s interesting stuff, but what I really want to talk about is why you shouldn’t harvest shellfish for consumption during a red tide bloom. Seems like a no brainer I know, but sadly its been happening a lot during this particular bloom.

Red tide is an example of a Harmful Algal Bloom (HAB), which results from higher than normal growth of a tiny single-celled dinoflagellate algae. Worldwide there are several algal species that can cause red, yellow, brown, and even green tide events. The species typically responsible for red tide blooms off Florida’s Gulf coast and other parts of the Gulf of Mexico is Karenia brevis. K. brevis naturally occurs in Gulf waters, but when conditions are favorable it can reproduce very quickly through cell division (every 48-120 hrs.) creating what we refer to as a bloom.

Red tide produces a neurotoxin (called brevetoxin) that paralyzes the gills of fish and causes death due to lack of oxygen. Slow moving fish and bottom dwellers are most susceptible, but all fish are vulnerable depending upon the severity and duration of the bloom. Red tide toxins can affect invertebrates such as shrimp and crabs, but the extent is not well defined. Bivalve species such as oysters and clams can accumulate high concentrations of the red tide toxin and then filter the toxins from their systems after three to six weeks, but they are still vulnerable to mortality as red tide events often result in low dissolved oxygen levels when the red tide cells and other marine organisms die. Marine mammals can be particularly susceptible to red tide events as toxins can be directly inhaled or consumed with aquatic plants.

Finfish are safe to eat when caught during a red tide event as long as they are caught live and filleted. Crabs and shrimp are also okay to eat because the toxins are not absorbed into the edible tissues of these animals. It is not safe to eat bivalves (clams, mussels or oysters) from areas affected by red tide. Shellfish can accumulate high concentration of brevetoxins, and when eaten, may cause Neurotoxic Shellfish Poisoning (NSP) resulting in serious gastrointestinal distress and neurological symptoms which include tingling of extremities and sensation reversal (cold feels hot and vice versa).

To legally harvest shellfish in Florida, a few conditions apply. First, you must have a valid Florida fishing license and you must abide by any size, bag, and season requirements. This part of the harvesting equation is managed by the Florida Fish and Wildlife Conservation Commission (FWC). Next, you must harvest from an area that is classified as approved, or conditionally approved for shellfish harvesting. Shellfish harvesting areas (SHAs) are classified by the State of Florida’s Department of Agriculture and Consumer Services (FDACs). Finally, you must ensure that the SHA you are harvesting from is open. Again FDACs is your source. Areas classified conditionally approved are periodically closed to harvesting based on pollution events, such as rainfall or increased river flow.

FDACs closes shellfish beds in red tide areas quickly and will not reopen them until the shellfish are safe to eat. To check the status of shellfish beds visit: http://shellfish.floridaaquaculture.com/seas/seas_statusmap.htm. SHAs can open and close daily. Most of the SHAs in southwest Florida are closed and have been since last fall.

Cooking does not destroy the red tide brevetoxin that causes NSP. So a word to the wise, know when and where you may recreationally harvest or buy farm raised product. Purchasing clams and other bivalves from restaurants and reputable retailers during a red tide bloom is safe as these products will have been harvested from unaffected areas.

The controls in place for dealing with red tide have resulted in no documented cases of NSP from Florida farm raised shellfish over the period of record. There have however been documented cases of NSP in persons who have recreationally harvested clams (and other shellfish) during SHA closures. Don’t set yourself up for NSP, follow the rules and stay safe when recreationally harvesting shellfish from Florida waters.

← Lionfish in the Bay!
Seagrass Awareness – All Year Long →