As part of Hispanic Heritage Month recognized during September 15 through October 15, CALS is showcasing its students, faculty, and alumni who research topics of importance to Latin America.

The UF/IFAS wildlife ecology and conservation department (WEC) has a long history of researching topics related to the protection and management of natural resources and species in Latin America. Learn what some of our graduate students in the department are researching in the stories below!

As a child, Diego García-Olaechea found himself naturally curious about nature and wildlife. After earning his undergraduate degree in biology, García-Olaechea worked for non-governmental conservation organizations and in environmental consulting in Peru. While serving as a bird guide in northern Peru, García-Olaechea met students of Scott Robinson, a WEC affiliate professor and curator of ornithology at UF’s Florida Museum of Natural History. After meeting with Robinson, García-Olaechea explored options of studying at UF under Robinson and Bette Loiselle, a WEC professor.

Using his knowledge of birds inhabiting the dry forests of northwest Peru, García-Olaechea pursued a Fulbright scholarship and earned a scholarship from the Peruvian government to study the effects of climate change on these dry forest birds at UF. Unlike rain forests, the dry forests only receive three-to-five months of rain a year before a period of extreme drought. Through species distribution modeling, García-Olaechea is researching the ability to predict what the habitats will look like 50-80 years into the future as well as how the dry forest birds will respond. Through García-Olaechea’s research, he aims to provide tools to the local communities and government for ways to better protect and manage these lands.

As an undergraduate student in Guatemala, Diego Juarez-Sanchez became interested in researching carnivorous mammals. Juarez-Sanchez noticed that the rivers in Guatemala were filling up with armor catfish, an invasive species from the Amazon introduced in Mexico that migrated to the headwaters in Guatemala. The fish become entangled in the fishing nets of the Guatemalan subsistence fishers, who are in search of native fish. They throw the catfish to the river shores, causing future issues as well as damaging the fishers’ gear – ultimately affecting their livelihoods.

After working for governmental and non-governmental organizations focused on conservation efforts, Juarez-Sanchez pursued a Fulbright scholarship opportunity at UF to study the effect of armor catfish on the neotropical river otters’ diet as natural predators of the catfish in northern Guatemala. He studied under WEC faculty members, Eric Hellgren and John Blake, for his master’s program and has expanded his research to studying additional predators of the catfish under WEC research assistant professor, Christina Romagosa.

Ultimately, Juarez-Sanchez desires to evaluate if the diversity of native predators can naturally control the population of the invasive species. This would prove valuable for conservation and Extension efforts. The knowledge gained would help show local Guatemalans why it is important to preserve native catfish predators as well as how humans can benefit from the predators’ presence in fishing areas, among other benefits. 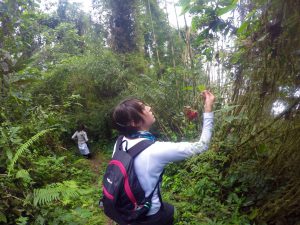 Javiera Rudolph always found herself drawn to math and biology. However, in her undergraduate studies the Universidad San Francisco de Quito in Ecuador, Rudolph had difficulty merging the two interests together – until she met Bette Loiselle, a WEC professor at UF. Once she came to UF and began studying under her advisors, Loiselle and Jose Miguel Ponciano, the native Chilean saw the possibilities of utilizing math to solve biological questions.

Through the guidance of her advisors, Rudolph was able to let her natural curiosities develop and lead her to her Ph.D. research. Rudolph is currently working on using Extreme Value Theory, a branch of statistics that deals with the tails or extremes, to forecast the probability of rare ecological events. Typically, this set of statistical tools are used to predict extreme events such as hurricanes or fluctuations in the stock exchange, however she aims to utilize extreme value analyzis to build a framework for ecologists to use on their own datasets. She is currently working on analyzing the consequences of frugivore individual variation on long-distance seed dispersal events.

In addition to her research, Rudolph has a strong interest in extending STEM and coding opportunities to women and minorities. She is a co-organizer for “R Ladies”, a local Gainesville chapter of an organization that promotes gender diversity in the R programming community. She is the current president of Gator Moms, a student organization that supports student-parents on UF’s campus.

Growing up in rural North Carolina provided Thomas Smith with an appreciation for nature. He took the plunge to pursue an undergraduate degree studying ecology in Hawaii where he spent the next 12 years studying behavioral ecology and working on conservation projects.

Smith’s work in Hawaii led him to the larger question of what happens as people fragment populations of animals through habitat loss and land cover change. Smith decided to conduct this research at UF with Emilio Bruna, a WEC professor. By studying a native cactus bug in 27 different landscapes at the UF/IFAS Ordway-Swisher Biological Station, Smith is able to predict the outcomes of other organisms in similar scenarios.

Once completed, Smith’s research will be able to inform populations in Latin America and elsewhere on ways to improve animal habitats. Possible solutions include developing natural area corridors or semi-natural spaces in between farm land, assessing where to build roads, and utilizing wildlife data when conducting urban planning.

Nearly 20 years ago, caimans almost became extinct. Now, locals need guidance on how to maintain the caiman population. By using his connections in Brazil, Botero-Arias is working with the local governments to provide advice on developing guidelines for local management of caimans in Brazil.

The aim of Botero-Arias’ research is to ensure the population of caimans won’t become extinct again, yet still be kept under control. Through his research, he hopes to increase the quality of life for the local Amazonians by sharing information to help them utilize the natural resources around them effectively, including caimans.

After meeting and conducting research under WEC assistant professor Miguel Acevedo-Torres in her home country of Puerto Rico, first-year master’s student Virnaliz Cruz-Hernandez continues her study of malaria in lizards on a National Science Foundation fellowship at UF.

Cruz-Hernandez is able to study malaria – a vector-borne disease – in lizards to use as an indicator of how malaria can or will affect humans due to changes in land and land use. By understanding the change that the lizards’ red blood cells undergo after contracting malaria, Cruz-Hernandez can see how variations will occur in other animals as well as humans. The goal of her research is to predict how land change produces zoonotic diseases, which are diseases transferred between animals and humans.

Cruz-Hernandez is particularly interested in understanding how we can better predict animal diseases and their outcomes. “Diseases regulate animal systems and we depend on [animal systems] for survival,” she said.

Dana Edwards is the strategic communications manager for the UF/IFAS College of Agricultural and Life Sciences. In her spare time, she enjoys reading, crafting, traveling and playing with her rescue pup. ...