Climate Change News – The Good and the Bad

On August 9, 2021, the Intergovernmental Panel on Climate Change (also known as the IPCC) released its latest report about the current state of our climate. The report also talks about what we can expect to see in the future. As with any climate change report or scientific study, there’s some good and some bad news. Let me highlight for you some of the takeaways.

“It is unequivocal that human influence has warmed the atmosphere, ocean, and land. Widespread and rapid changes… have occurred.”

The main reason for so much emphasis on this takeaway is because of the word “unequivocal”. Scientists have been saying for decades that humans are the cause of current global climate change. This isn’t new, it’s not surprising, and it is undisputed knowledge. But including “unequivocal” means “leaving no doubt”, which makes this statement stand out and makes us take notice. 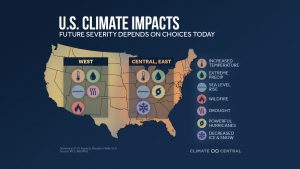 Humans are causing more extreme weather, heat waves, droughts, hurricanes, floods, and wildfires (just to name a few). It has been proven that without human activity the increase in extreme weather events would be “virtually impossible” and due to increasing warming we can forecast that extreme events will continue to increase. We’ve allowed climate change to progress so much that we can see it affecting individual storms and weather events happening now around the world. Because we can see these affects today, there’s more certainty about how climate change will affect the globe. This certainty allows us to better understand how we can stop or reduce the severity of these events in the future. 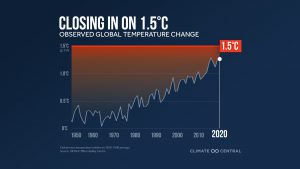 the earth will soon reach or exceed 1.5 degrees Celsius by 2050. Since we are already seeing the effects of a warmer world today, scientists have a better idea of what our world will look like in the future with further temperature increases.

But we can slow down this warming. If humans do stop burning fossil fuels over the next 20 years we won’t see a traumatic increase in temperature or sea level rise. With changes we make today, we won’t see such a dramatic change in our world.

Some impacts are unavoidable since the climate has already changed. Even if we stop greenhouse gas 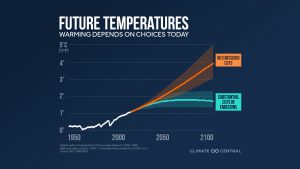 emissions today sea levels will continue to rise for several decades until there’s an equilibrium of sorts. But seas might rise slowly instead of at the current rate. We will also continue to live on a hot planet for a couple of decades. But the question is if this will be our last couple decades of global warming. Knowing that we can reduce the amount of warming by cutting greenhouse gas emissions allows local governments to plan, adapt, and mitigate climate change and its effects. If we cut our greenhouse gas emissions, we might see that warming stabilize and not continue to increase 20 years from now.

I think this is the most important takeaway from this report. It’s not too late to take action. Decisions we make today can impact how much our world will change. That means there is hope for our future and the world if we act now.

Thanks to the review and edits by Dr. Ashley Smyth and Alicia Betancourt for this blog post.

References and Other Resources

I recommend listening to this Short Wave podcast episode, which explains 3 hopeful takeaways from the report