A Florida native sunflower that grows in low wet areas throughout the state, but also performs well in landscapes is the Swamp Sunflower (Helianthus angustifolius). It is also sometimes called Narrow-leaf Sunflower, which describes it’s long, narrow leaves that are rough like sandpaper. But this plant is better known for its tall stems that display profuse numbers of golden yellow flowers in late summer and fall.

The Swamp Sunflower is root hardy in areas across the southeastern United States, and spreads by underground rhizomes to form large clumps. Plants grow taller throughout the summer reaching up to 6 feet tall before blooming in autumn.

Like other sunflowers, this plant performs best in full sun. Plants grown in partial shade will not produce as many flowers, will become leggy and may fall over without support. 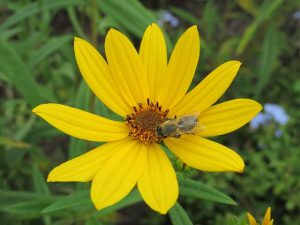 As its name implies, the Swamp Sunflower thrives in moist areas, but will also thrive in well-drained garden soils if watered during dry spells. You can cut the plant back in early June to make it bushier when it blooms later in the year. Then cut back the dead stems after flowering to maintain a neater appearance. Root masses can be divided in spring or autumn.

The Swamp Sunflower can be found growing in the Baker County Arboretum and Gardens located at the Extension Office. For more information on this plant and photos from our garden, see: Swamp Sunflower, Helianthus angustifolius

To learn more about our garden and the plant species found there, visit: Arboretum & Gardens of Baker County