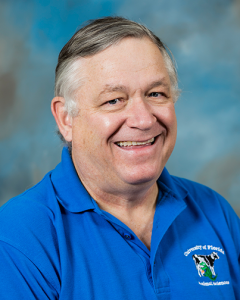 Dr. Hansen joined the faculty at Florida as an assistant professor in the College of Veterinary Medicine in 1984 and transferred to the Dairy Science Department (now Animal Sciences) in 1986. His research focus is in the fields of thermal biology and embryology, primarily focused on dairy cattle.

Briefly, what are the origins of embryo transfer as a clinical procedure?

The first embryo transfer (ET) was in the 1890s by Walter Heap. He did it on his parents’ farm with rabbits while he was a student, at Cambridge. He was the first one to use ET. I think, this procedure was generally utilized to help infertile women have babies to help infertile animals have babies. It was to bypass some of the losses of reproductive function that might occur. For example, if you had blocked Fallopian tubes, you could do ET to bypass that.

Why would embryo transfer be beneficial to the cattle industry?

So ET has been going on in the cattle industry, probably since the 70s, but it was just a marketing tool. The offspring were no better than the offspring bred by artificial insemination (AI). The benefit ET was meant to provide was to propagate genetically valuable females more quickly than normal mating. So, in a normal setting, a cow gives birth to one calf a year. If we could use ET, she’d still just give birth to one calf, but she’d have more than one offspring. So you could increase the number of genetically valuable females.

Were there are problems with using embryo transfer for cattle?

Yeah, so for a long time there was one little glitch. We didn’t really know how to identify the general genetically superior females. We used to have really great genetic estimates of who’s the best bull from AI, and really terrible estimates of the best cow. Back in the old days, meaning before 2009, if you had a bunch of bulls, got semen from them, and then produced 50 daughters from each bull and measured the daughter’s performance, then you could say OK, this bull is good. But you couldn’t do that with a heifer. I mean, she would never have 50 calves a year, so by the time she had enough offspring to measure, she’d be too old.

Is that still the case? What changed?

What happened in 2009 was genomics. Now you could just take a little piece of DNA and get a really good estimate of the cow’s genetic merits or growth rate. So now you could tell who the best cows were. That really changed dairy cattle breeding because before that it was all based on the bull. But once genomics came around, you know who the best bull or cow was as soon as they were born. All you need to get a blood sample, and so that really sped up the process.

I got interested in ET because of heat stress, not for genetic improvement. I just wanted to improve fertility, and it works. Basically, cows bred in the summer are much less likely to get pregnant than cows bred in the winter. A lot of that is because of the embryo. Either it doesn’t form after fertilization because the oocyte has been damaged by heat stress, or the early embryo cannot live in our mother whose body temperature is half a degree centigrade higher than normal, so the embryo dies. But by day seven of pregnancy, that embryo can survive in a mother that’s got a higher temperature. And ET is done on day seven, so if you put an embryo in even if the cow is heat stressed, the embryo can survive. It’s already survived the early days when it’s most susceptible to heat stress. So in the context of heat stress, ET greatly improves the pregnancy rate.

Is this something that you may see increases in use producers in the future?

So embryo transfer is not really used a lot in dairy cattle, except for elite herds because it’s expensive. You can buy a straw of semen for AI for a few dollars, some less than $10, but probably the cheapest embryo would be around $50. Then you also pay for the technician to put the embryo in, and they might charge around $50 per cow. So you’re at $50 for the embryo and $50 for the technician, so $100. The cost of the calf overall is much more expensive than AI. The economics right now are against using ET just to get cows pregnant. If we could make it cheaper, or if we could increase the value of the embryo genetically it might be worthwhile.

Briefly, why do you believe the research you do is important?

I think it matters because we are trying to make the whole system of producing food from animals more cost-effective, more profitable for the farmer, making food more accessible for the consumer, and reducing the Greenhouse gas footprint associated with livestock production. The embryo is just one piece of the puzzle, but it helps us improve animals genetically, and I hope we’ll be able to use it to improve fertility.

That would have any advice for someone like you who’s interested in animal science research as a career?

I think if they have to see if they really like it. If you can as an undergrad, get some experience working around a lab. I’m a big believer in doing their Master’s before a Ph.D. only because some people find out that they love science but they don’t love being a scientist. It’s very frustrating and you’re always being told you’re wrong. They reject your papers, they criticize your thesis and your seminar, and that’s just part of it. Then you know things don’t work, over and over your trials don’t work. Or a lot of people hate to write, and there’s a lot of writing in science. So you have to see whether you like it, and then if you do, try to find somebody nurturing as a professor. I try to be that nurturing professor to my graduate students, but what I suggest, is to go visit and talk to the grad students. They can tell you if the environment is good.

by Zoe and Shelby Thomas

Zoe Bowden is an undergraduate academic advisor and communication specialist for the UF/IFAS Department of Animal Sciences. In her spare time, she enjoys hiking, painting, traveling and playing with her rescue pup. ...

Shelby is the communications and engagement manager at the UF/IFAS Department of Animal Sciences. She enjoys photography, riding horses, traveling and cheering on the Gators. She can be contacted at soesterreicher@ufl.edu.