Huge smiles, excited laughter and ‘ohhs and ahhs’ fill the air when people visit zoos, aquariums, nature parks, animal reservations, and national parks. A lot of people feel an intense connection with wildlife and the natural areas they inhabit. In fact, it’s hard to imagine someone that wouldn’t just simply love the beauty of nature and feel a moral, or even an obligation to help protect and conserve species. With an exponentially growing human population, climate change and limited resources (including land), then why should we conserve a species? Simply put, saving species benefits the public and the economy.

A win for the species

Undoubtedly, species benefit from most forms of human intervention and protection. Many species are going extinct at an alarming rate and some scientists even suggest that we are facing a 6th mass extinction.1 For some species it is already too late. Luckily, there are a lot conservationists working hard to protect species. Throughout the years there has been numerous success stories of rebounding and revitalizing species near extinction. For example, black-footed ferrets were thought to be extinct in the wild. A small wild population was found in the 1980’s and through great conservation efforts black-footed ferret populations are rebounding in the wild.2

A win for the public

Many people also win when conserving nature. Most nature lovers would argue that nature is beautiful and they feel a higher calling or a moral obligation to conserve species. Thus, conserving species has a key benefit for some. Protecting our wildlife and the habitat they live in feels good and nature lovers get to enjoy natural areas. This is an easy group of people to convince that saving species has merit.

What about the people that don’t feel a moral obligation or unable to afford to protect species? Ecotourism is one way for many people to benefit from conserving natural areas and wildlife. If managed correctly, local communities near the park maintain certain aspects of control and profits. Ecotourism continues to benefit people in developing countries. For instance, ecotourism in a Malaysian marine park generated numerous jobs for the local community and provided significant economic benefits for locals. 3

A win for the economy

Regarding the impact of conserving species on a global level, a wise man once said, ‘when it’s not about the money…. it’s about the money.’ In fact, conserving species is a great global investment! Conserving the global ecological systems (natural capital) provides goods and services approaching $33 trillion a year. Other studies have shown the global economic impact of nature produces $18 trillion a year.4 It is safe to say the conserving natural areas and the organism that inhabit these areas are both socially and economically valuable.

Zoos are sources of entertainment. However, many zoos implement and participate in the conservation of species (big and small). Zoos often provide conservation initiatives with not only financial support, but also logistics, oversight and management to ensure that species have the best protection possible. Collectively, world zoos spend upwards of $350 million annually on animal conservation.5

Zoos and aquariums serve to: 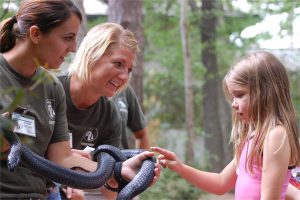 Finally, one of greatest impact zoos can have on species conservation, is educating and inspiring humans to help protect them. Worldwide, about 700 million people visit zoos annually. Accredited zoos and aquariums act as ambassadors for many endangered species and help enhance public perception and awareness. Simply put, you never know who will be the next Jane Goodall, and zoos provide a foundation to educate the masses and motivate many towards conservation initiatives.

2Lockhart, J. M., Thorne, E. T., & Gober, D. R. (2004, January). A historical perspective on recovery of the black-footed ferret and the biological and political challenges affecting its future. In J. E. Roelle, B. J. Miller, J. L. Godbey, & D. E. Biggins (Eds.), Recovery of the black-footed ferret: progress and continuing challenges. Proceedings of the Symposium on the Status of the Black-footed Ferret and its Habitat, Fort Collins, Colorado (pp. 6-19).