Skip Navigation or Skip to Content
Home » UF/IFAS Extension Alachua County » Gardens Of The World: A Period Of Darkness

Gardens of the World: A Period of Darkness

A Dark Period of Time

Everything outside the walls is wild and dangerous…The decline of the Roman empire led to the beginning of the Medieval Period or Middle Ages. Once Rome fell, western Europe was in chaos, there were mass migrations, looming threats, resource uncertainty, and power grabs, which gave rise to Feudalism. As feudalism came into being, gardens didn’t become obsolete but primarily became protected areas within and around fortifications and monasteries. These notable gardens are Cloister Gardens and are notable gardens of the world.

Medieval cloister gardens are spaces typically located on the southern portion of a church and is surrounded by other buildings associated with the church, like dormitories or kitchens. Their design and layout are very similar to the peristyle courts present within Greek and Roman gardens but had strong religious influence, similar to the Persian gardens. The cloisters did not contain many ornamental plants – they were primarily areas of scythed grass. These spaces served as areas for rest, meditation, and circulation. Cloisters did not begin planting ornamental plants until the Renaissance period.

Mont St. Michel Abbey is located in Lower Normandy, France. Early records from the 9th Century give an indication of the abbey’s original period of origination. Sitting atop a high point, one side of the cloister overlooks the Bay of Mont Saint-Michel at the terminus of France’s Selune river. The cloister is surrounded by a collonade, although it wasn’t directly linked to the monastery. Although, the cloister served as a center for meditation by the monks.

Now an archeological site, St Augustine’s Abbey in Canterbury, UK, is home the remnants of a very traditional cloister during the Middle Ages. The King of Kent, Ethelbert allowed the construction of St Augustine Abbey in 598, which ended up becoming the center of English Christianity. The cloister was on the northern side of the cathedral but was also flanked by lodging, kitchens, and halls. Similarly, the Norman Canterberry Catherdral is close by, which has a similar design/layout.

Pandhof Garden at the Domkerk Utrecht Cathedral in Utrecht, Netherlands, dates back to the 14th century. Gothic style architecture surrounds Pandhof Garden, which is a notable architectural style during the high and late middle ages. 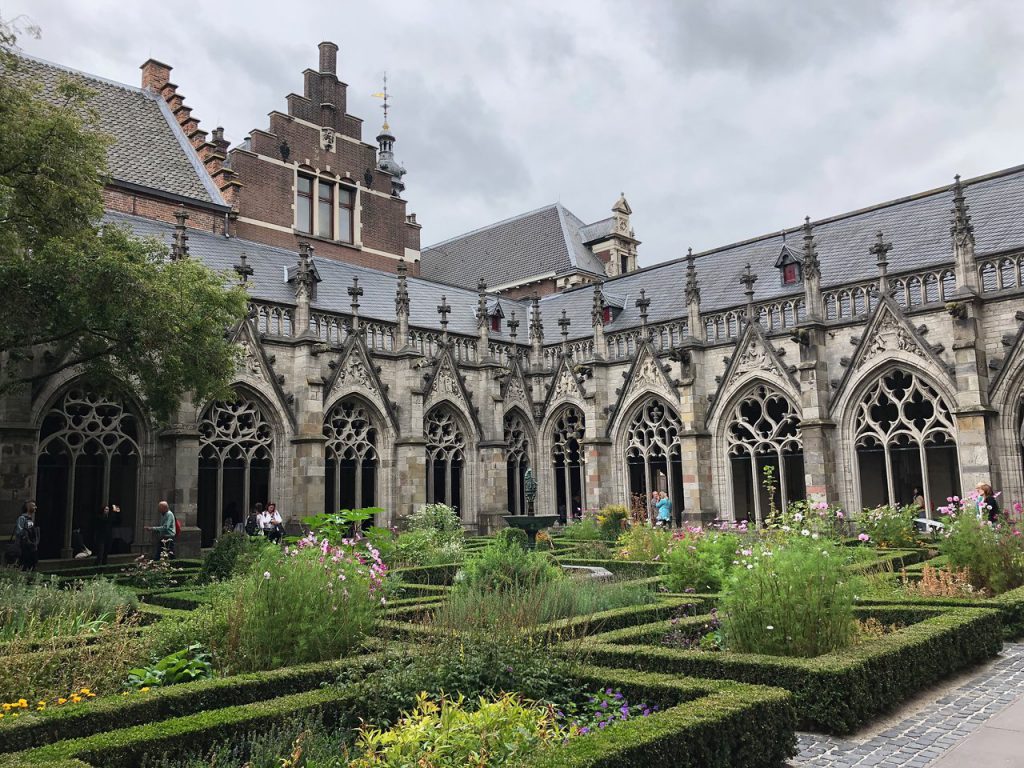 During the Medieval period, cloister gardens were not an exclusive garden type. Other important Medieval gardens were functional, including kitchen gardens, infirmary gardens, cemeteries, orchards, and vineyards. Monasteries, castles, and even with individual homes provided space for these gardens.

Supplying food was of the utmost importance during this period. Nobles had large areas of land for agricultural production, which included cereals like wheat, barley, and rye. Feudalism peasants, or serfs, primarily served as laborers for food production, but many had their own, albeit small, gardens where they would grow vegetables, herbs, and flowers.

During the early periods of the Middle Ages, European gardens were rather utilitarian and focused on food production. It was not until the beginning of the High Middle Ages where gardens began to diversify and adopted ornamental landscape practices increased. Arabic landscapes influenced the Normans during their conquest of Sicily. Other ornamental gardening influences came from interactions with ornamental landscapes during the Crusades. A notable garden from this period if the Norman Palace in Palermo, Italy.

As Europe began to exit the Medieval Period and enter the Renaissance, gardens have evolved and changed from utilitarian landscapes developed to weather the storm of the falling Roman Empire to more ornate landscapes. The Renaissance became a period of growth and it did not matter if your favorite color was blue or yellow. This period of enlightenment influenced science, technology, art, and, of course, the gardens of the world.