If you think about it, watering the yard with sprinklers is one of the rare situations in which the product is sprayed away from the target in order to apply it. Sprinklers do this in order to distribute the water over large areas and let water “rain down” on plants, but in the process, water is sprayed up into the air where part of it evaporates and part of it can be blown away. The water then falls on the top of the plants from which another portion of it evaporates as it works it way down through the foliage to its true target: the soil and plant roots. With sprinkler irrigation, up to half the water used never reaches the plant. Most of it goes up into the air, and next time your sprinkler is running, make a note of how much water simply runs off and down the driveway or gutter.

It has been estimated that a third of the water used by a typical home goes into watering the landscape, but many homes use more, with landscape watering taking up to 70% of their monthly water use. Whatever your landscape water use is, up to half of it never helps your plants. Multiply this by the millions of homes that are watering landscapes, and we have trillions of gallons of water a year being wasted in the U.S. This not only affects individual utility bills, but it has critical implications for communities, many of which have been dealing with water shortages for years as the number of people living in cities and suburbs increases and as climate change causes regional rain shortfalls and droughts.

However, if this problem is caused by the habits and water use of millions of households, it can also be solved that way. If all those households adopted better irrigation techniques, billions of gallons of water a day would be saved. 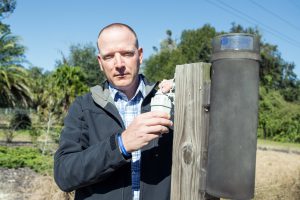 This is Michael Dukes’ specialty. He has done a great deal of work on this problem and its solution as part of a career focused on irrigation water in both urban settings and in agriculture. Dukes has worked on all aspects of these issues, including use of modern irrigation systems, controllers, and practices, as well as system testing, water requirements of various plants and landscapes, water quality, fertilizer use, and others. His comprehensive approach to the problem has given him an equally comprehensive understanding, which has made him a valued researcher and consultant.

Dukes is valued as well as Director of the Center for Land Use Efficiency (CLUE; formerly, Center for Landscape Conservation and Ecology), where he leads a diverse team of faculty specializing in many areas of water use and its impact on communities, economics, water quality, and sustainability. Also included are faculty whose focus is communications and social marketing.

The CLUE team has worked on many engineering aspects of water conservation, and research continues to confirm that water conservation technologies and practices, coupled with educational efforts through Extension and other agencies, are making a difference in water use. The U.S. Geological Service has reported that per capita water use in Florida dropped by just over 20 percent in the years 2000 to 2020 – at the same time that Florida’s population grew by 25%! Extension efforts to encourage conservation through research and education have played an important role in Florida’s water savings. The CLUE annual report for 2021 estimated that Extension conservation programs alone helped save over 300 million gallons of Florida water in 2020.

In recent years, CLUE faculty have become more focused on one of the most complicated aspects of conservation: the human element. Research has also shown that this aspect of water conservation remains critical.

In 2020, Dukes summarized 20 years of smart irrigation control use in U.S. landscapes for the national irrigation symposium “Beyond 2020: Visions of the Future.” Included in his report was work done by a variety of CLUE faculty that looked at human factors like perception, adoption, and use of irrigation controllers and the impact of those factors on actual conservation. User satisfaction with irrigation systems was key to positive perception, and like any technology, the researchers found that if users became frustrated with operating the system or felt that it was not saving water, they became dissatisfied. Dukes reported that key to preventing these problems was education of both homeowners and installers, and it was suggested that homeowners needed repeated educational support regarding system operation and best practices. One example of this support is an Innovative smartphone app developed at UF that allows homeowners to control their irrigation system based on local weather. This type of aid is attractive to many potential owners of irrigation systems and makes it more likely that homeowners will interact successfully with the system.

Although human factors related to irrigation technologies were largely unstudied 20 years ago, their importance has been recognized among irrigation specialists, and the number of studies in this area has steadily increased over the last ten years. Understanding how people interact with technology and finding ways to help make that interaction positive are important tasks for improving water conservation behaviors and practices. This is how the problem becomes the solution: when millions of Floridians are improving their water conservation practices, millions of small savings add up to billions of gallons of water saved. There are dollar savings as well, for individuals, for utilities, and for communities.

We’ve focused on domestic water use, but just as much could be said about agricultural water use, which is about equal to the state’s domestic water use. Florida’s 47,000 farms take up almost 10 million acres and use 750 billion gallons of water each year, which presents an opportunity for significant savings with  the right support. Dukes and CLUE work with agricultural producers to determine precise water needs for their crops and how best to put the right amount of water in the right place at the right time. CLUE faculty  conduct studies of specific crops, such as corn, peanut, potato, and many other important Florida crops and supply technical guidance to help producers reduce their water use and their utility costs while preserving the productivity of their fields.

The work that Dukes and CLUE are doing is very important for Florida, where one of our most important resources – and attractions – is water. We turn on the hose or the kitchen tap, and we don’t have to think about it much, but that’s where the conservation revolution begins.

And the global implications? The United Nations reports that water use worldwide is growing twice as fast as population. This story has two parts. Around the world, as more people concentrate in cities and seek to improve their standard of living, domestic water use increases, and as agriculture becomes more mechanized and as there are more people to feed, agricultural water use increases – new technologies and education and needed to address both parts of this situation. Much progress has been made, but these issues are exciting research frontiers for the future, and the solutions are being sought by Michael Dukes and his colleagues at CLUE right here in sunny Florida!

This article was written by: Charles Brown

McKenzie Wynn is the Marketing and Communications Specialist for the Agricultural and Biological Engineering Department. She graduated from UF in 2019 with her bachelors degree in Media Production and is currently obtaining her master’s degree in Mass Communications, specializing in social media and web design. ...