June 12, 2015, Release for the Tallahassee Democrat

Blueberry bush heavy with blueberries on the brink of ripening. Photo by Molly Jameson

Nestled just three miles from the courthouse in downtown Monticello, Blue Sky Farm, a u-pick blueberry operation, is nearing its grand opening. Owner Pete Crosby is celebrating by inviting the public to come out on Saturday, June 13, from 8 a.m. to 1 p.m., to explore the farm and handpick blueberries to purchase and take home. 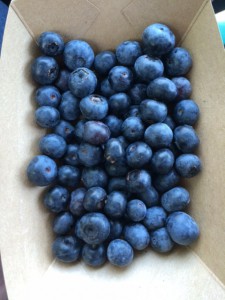 Blue Sky Farm was established in 2012, when over 350 blueberry bushes were planted by hand. Nearly four years later, they are finally ready to be harvested. For the first several years, Pete concentrated on promoting vigorous vegetative growth by pruning back flowers. Now most of the blueberry bushes are heavy with fruit and have begun to ripen into their deep, bright shades of blue.

Blue Sky Farm uses sustainable farming methods, including a drip irrigation system, which slowly delivers water precisely to the root zone of the bushes using drip tape. A barrier weed cloth is used to assist with weed control, although any weeds that do grow are controlled through hand-weeding. The blueberry bushes are fertilized using an organic fertilizer that is incorporated into the soil and then heavily mulched with pine needles from pine trees that grow on site. Over time, this pine straw mulch decomposes, adding valuable organic matter to the soil, which is very important for healthy growth of the bushes. Also, blueberries require a soil pH between 4.0 and 5.5 for optimum growth, which is lower than most other fruits and vegetables. Pine straw mulch is highly acidic, which helps maintain the low soil pH and allows the blueberries to thrive. Except for the blueberry bushes, Blue Sky Farm is largely wooded, allowing habitat for a diversity of beneficial insects, which help control pest populations.

The blueberries grown on Blue Sky Farm are mostly various rabbiteye cultivars, which are the best varieties that can be grown in our hot and humid Northwest Florida climate. All blueberries require a certain number of “chilling hours” in the winter in order to produce fruit in the summer. But rabbiteye blueberries have been developed to grow well with fewer chilling hours, making them an excellent choice for growers in our area.

One of the early varieties grown on Blue Sky Farm is called “Climax,” whose berries usually begin ripening in May in our area. Although early-season blueberry varieties are not usually as productive as later-season varieties, they do an excellent job of jump-starting the blueberry season. Some mid-season varieties grown on Blue Sky Farm include “Bright-well,” “Bluebell,” and “Titan.” Bright-well are light blue in color and firmer than some. Bluebell ripens up a few at a time during the month of June, making them an excellent variety for blueberry grazing. Titan is a new cultivar developed by the University of Georgia, which produces blueberries that can grow two to four times the size of your average blueberry. Blue Sky Farm also grows a few late-season varieties, including “Tifblue,” which is a very popular variety that produces berries that are large, firm, and highly flavorful. 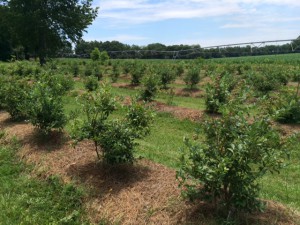 When you come out to the farm to harvest your berries, be sure to come prepared by bringing along water, a hat, and sunscreen, as it can get very sunny and hot this time of year. Also, be sure to wear socks and closed-toe shoes for protection from the critters.

Blue Sky Farm anticipates being open additional weekends this summer, as peak blueberry season runs from about mid-June to mid-July. Given fluctuations in rainfall, temperature, and other environmental factors, anyone interested in picking and purchasing (cash only) blueberries should first check the Blue Sky Farm website at http://www.bskyfarm.com, as it is updated regularly during the season.

Some other u-pick blueberry farms in our area include Windy Hill Vineyard and Green Meadows Farm. Check out Farm Fresh Organics of Monticello FL LLC, Myrtle Creek Farm, Jubilee Orchards LLC, and Breaking Away Farm for local blueberries that are not u-pick, but currently have blueberries available for purchase.

Molly Jameson is a Sustainable Agriculture and Community Food Systems Extension Agent with Leon County/University of Florida IFAS Extension. For gardening questions, email us at Ask-A-Mastergardener@leoncountyfl.gov.

← Coontie, a Graceful Addition to the Garden
The Danger Within… What’s Hiding in Our Woods →