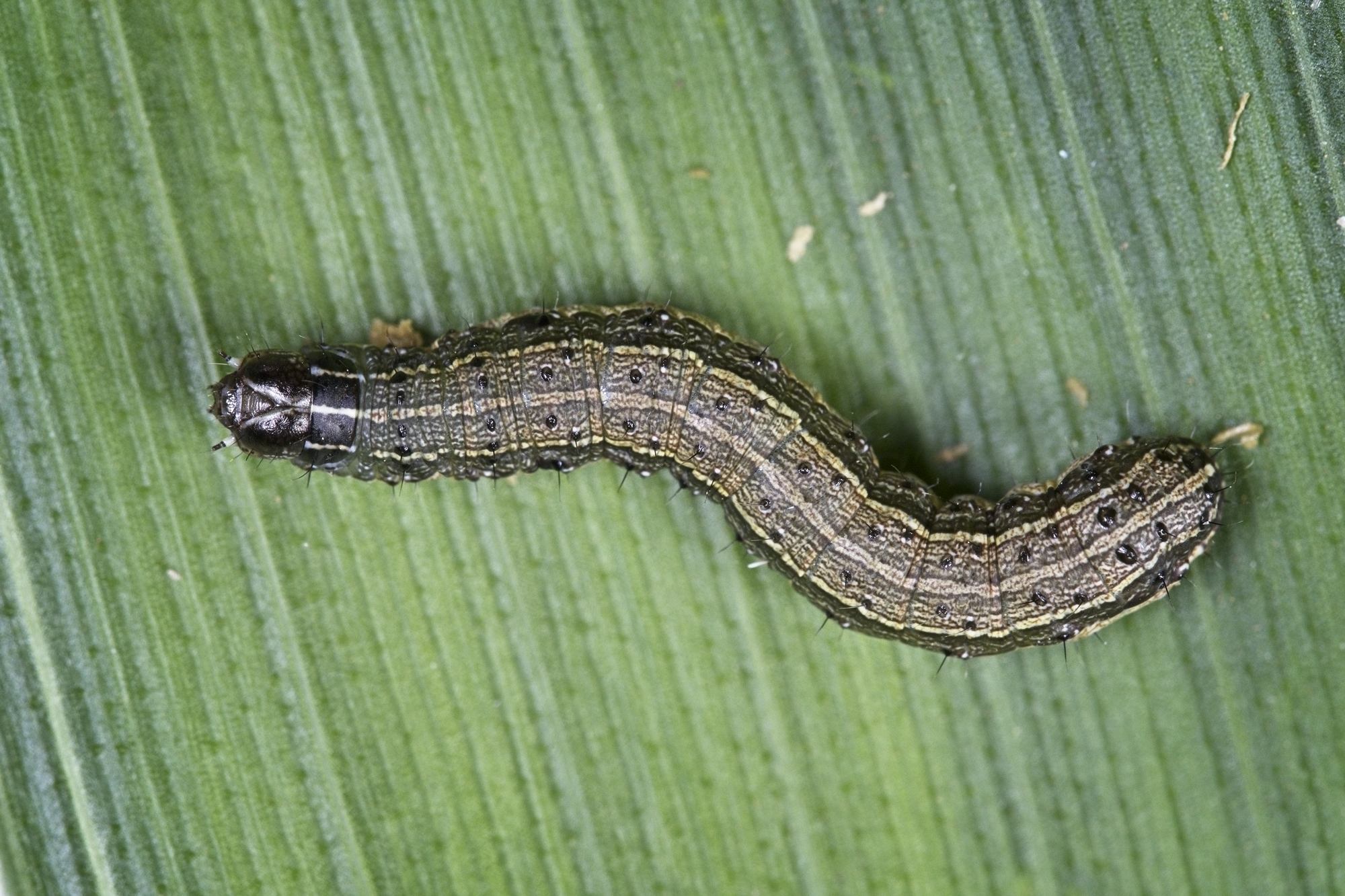 Fall armyworms (FAW) Spodoptera frugiperda, are certainly not a new pest in this region, but there are some unique challenges to deal with in 2021.  The adult moths migrate in from South Florida into this region each spring/summer and lay eggs in fertilized forage grasses, build their population through multiple generations, and then migrate to other crops.   According to Management of Fall Armyworm in Pastures and Hayfields, Fall armyworm larvae (worm stage) feed on 60 different plant hosts including forage grasses, corn, alfalfa, cotton, peanuts, soybeans, and most vegetable crops.  Fortunately, the most current BT corn and cotton varieties provide protection from this pest.

Alabama Extension Entomologists, Katelyn Kesheimer, Scott Graham, and Ayanava Majumdar organized a video conference call this week for Alabama and Panhandle Extension Agents to make us aware of the special challenges with armyworms across the southern states this summer.  Reports are coming in from all across the region of a tremendous surge in the numbers of fall armyworms in hayfields, crop and vegetable fields, as well as turf and vegetable gardens.  According to the 2021 Alabama Pest Report, the number of fall armyworm moths (adults) being trapped are five times higher than at the same time last year (585 7/23/21 vs 114 7/23/20) in Alabama.  Why so many this year?  The mild winter and the frequent rainfall events created a favorable environment for this pest this year.

In addition to a favorable environment, wet fields have prevented timely hay harvest or insecticide applications, allowing the population to build much faster than normal.  Typically from mid-June through early July most farms harvest their first cutting of hay.  That has not been the case this year, so the worms have had ample opportunity to feed and mature. So not only has the regular rainfall prevented field work, and hay harvest, but it has also allowed the armyworm population swell exponentially.

Another key issue is that there have been numerous reports of spray failures (<50% control) with Pyrethroid products (Mustang Maxx, Warrior, Declare, Tombstone, etc.).  Spray failures can be caused by pest resistance, heavy rain soon after application, or applicator error.  Thus far, actual pest resistance has not yet been documented, but is certainly suspected.  Another issue is that both the pyrethroid and growth regulator products (Dimilin and Intrepid) are not systemic in the plant, but provide contact control.  The caterpillars have to ingest the leaves for these products to be effective.  This requires at least 2-3 hours of drying time before a rain event to be fully effective.  The typical 7-10 day residual control from contact products is reduced with regular rainfall.  Systemic products such as chlorantraniliprole (Prevathon & Besiege) provide up to 21 days of residual activity and are less affected by frequent rainfall.  While the pyrethroid and growth regulator products are generally the cheaper options, if it is raining almost every day, the systemic products would be the better investment to protect your hay crop.

A third issue that arises with these periodic outbreaks are the limited products available for controlling armyworms for producers who don’t have a restricted use pesticide applicator license.  The options available to producers without a restricted license are Prevathon (best choice, systemic, but most expensive), Intrepid (growth regulator), Black Hawk (growth regulator most effective on small worms), Sevin (only effective on small worms), and organic BT products XenTari and Dipel that also work better on smaller worms.  As the population builds and more producers seek these products, supply issues can arise.  In checking with one local ag supply dealer, he has not run into supply issues at this point, but demand is noticeably increasing.

There are two distinct features that can be used to identify fall armyworms ((FAW):  1) The head has a distinctive marking in the shape of an upside-down Y, and 2) the rear end has four black dots that form a square.  The actual color of the worm can vary based on the growth stage and on the type of foliage it is found feeding on, ranging from bright green, to dark green, to brown. 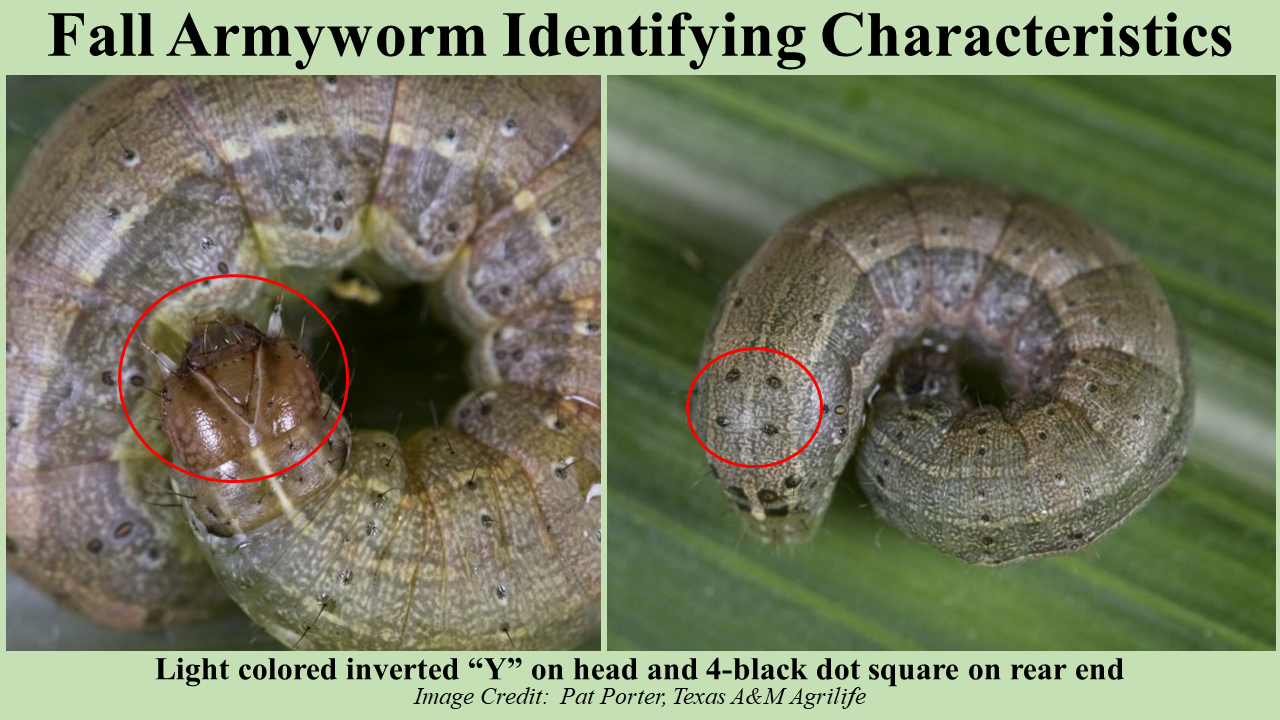 Scouting for FAW requires more than looking for cowbirds from the truck windows as you drive around the farm.  I have heard multiple producers admit that they rely on cattle egrets to point out their worm infestations.  Yes they are an indicator that there are caterpillars in a field, but when populations spike to heavy infestations, these birds can eat all of the worms they want in a small area.  This technique is helpful in normal years, but this year if you are not checking fields weekly, the worms may graze off your hay before you get to spray. Caterpillars don’t kill the grass, but they can graze it off within a matter of a few days with high populations and you lose a whole cutting and the fertilizer investment.

Scouting is not complicated, just get down on one knee and look closely at the leaves for damage and active feeding.  An armyworm’s defense mechanism is to drop off of the leaf and roll up when the grass is disturbed, so don’t just look at the leaves, but part the grass down to the ground and look for rolled up worms. Don’t just check in one or two spots, but just like with soil testing, randomly zigzag across the field. If you find an average of three or more worms/square foot, you should either spray the field with insecticide or harvest the hay as soon as possible.

Size does matter when it comes to treatment options as the larvae or caterpillar stage lasts two weeks, but the worms are the biggest and do the most damage over the last four days before pupating.  If you find a partially grazed off field with large worms approaching 1.5 to two inches long, it is likely too late to save the hay crop and the worms will pupate into the ground in a few days. A heavy FAW infestation can graze a field off cleaner than cattle in a few days.  If there is still enough forage remaining, you can also graze the field with cattle to salvage some value before it is all gone.  But if you miss the control opportunity, it is better to cut your losses, and refertilize the field for the next cutting.  However, be prepared to start scouting for the next generation to hatch three weeks later to prevent additional losses.

Figure 1. Relative amounts of food eaten by a fall armyworm caterpillar during each growth stage. In summer, a caterpillar feeds for about 14 days, but most of the food is consumed in the last four days. Credit: Management of Fall Armyworm in Pastures and Hayfields

If you need help scouting for armyworms or advice control options, contact your local county extension agent.  We can get the latest recommendations from state specialists working on this issue.  Managing FAW has become a more complicated issue this year, so seek advice before making the investment in control options.

For more information on this topic, use the following publication links: