What Toxic Weed is That??

Going through life, I’ve met some people that “think they know it all”.  I have always educated myself to be knowledgeable and have tried HARD to not have the “know it all” attitude.  In my role as a public educator, most people look to you to know everything at a drop of a hat.  This can be anywhere from toxic weed identification, to soil nutrients, to livestock questions.  Luckily I have learned that I don’t “know it all” and honestly I’m happy with that!

Many producers come to the office for weed identification or how to learn about treatment for weeds. I always do my best to provide them with scientific based answers.  I have improved my skills at identifying toxic weeds that could be consumed by livestock.  Just when I thought I was improving….BAM, you realize that you failed to identify toxic weeds on YOUR OWN cattle operation!

For the most part, this region has good control on toxic weeds. Typical weeds seen are tropical soda apple, smut grass, and broomsedge. Since Hurricane Irma, Highlands County has seen more nightshade popping up in cow and hay pastures.  I’m thinking this is due to hurricane force winds potentially bringing in seeds with the debris.

About six months ago my husband and I were checking our herd and I noticed how bad the thistles were getting, we had a bit of tropical soda apple, and our back pasture was covered in smut grass.  I also noticed a particular thistle looking weed that had pretty yellow flowers on it but didn’t think much of it. So in true wife fashion, I instructed him that we needed to herbicide ASAP.  Within that week we fertilized and herbicide the pastures and have only had to spot spray since then.

Fast forward to about a month ago…we were out with the cows and I noticed the thistle looking weeds with the yellow flowers coming back up.  I made a mental note to research that weed because I wasn’t sure what it was. Of course I kept forgetting and never did my research.

I have a weed identification poster in the hall by my office and look at it many times a day.  Randomly as I was running by it, I caught the thistle looking weed with yellow flowers out of the corner of my eye…it had been staring me in the face for the past 6 months! 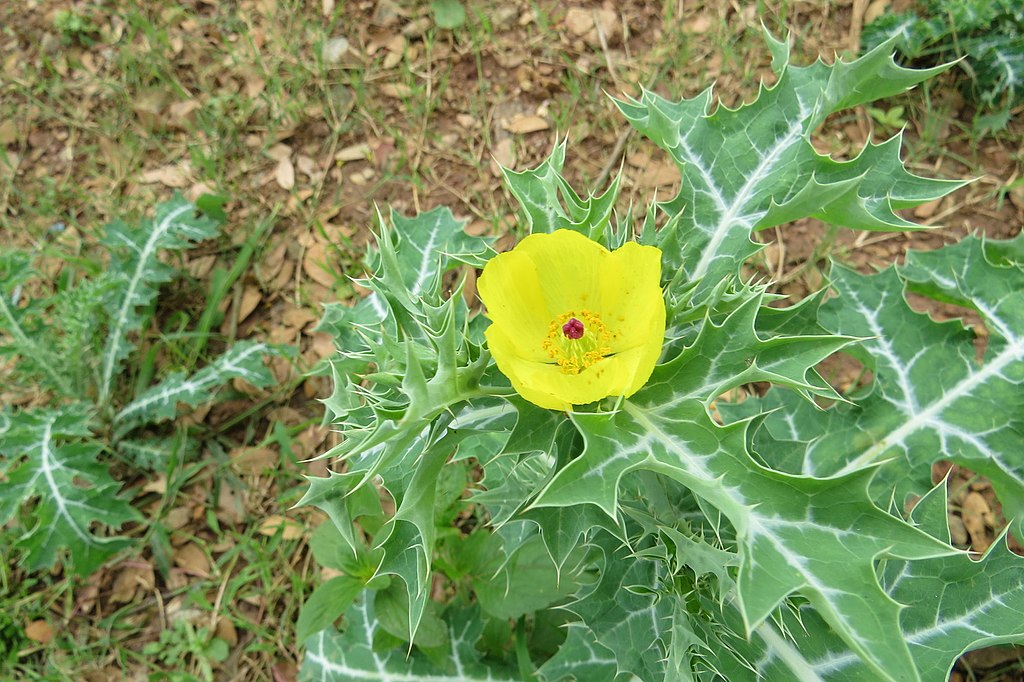 The weed is Mexican Prickly Poppy, also known as goatweed and it’s toxic to animals.  Low and behold the lady who’s supposed to be giving great livestock management advice has had this toxic weed in her pastures for at least the past 6 months!

After doing some research on the Mexican prickly poppy, I found that it is toxic however most animals know to stay away from it.  It looks like a thistle but when the stem is broken, a yellowish milky sap is exuded.  Only a few cases have been reported of cattle dying from this toxic weed and its seeds can stay dormant in the soil for many years.  No wonder we couldn’t get rid of those pesky things!

Moral of the story, no matter how much you THINK you know, you DON’T know it all!

Click here for more information on the Mexican Prickly Poppy.

2 Comments on “What Toxic Weed is That??”