Year-round lobster seasons?! Besides the Caribbean spiny lobster (Pannulirus argus), there are 3 other commonly found species of lobster in Florida, the spotted spiny lobster (Panulrius guttatus), Spanish lobster (Scyllarides aequinoctialis) and the ridged slipper lobster (Scyllarides nodifer). Unlike the Caribbean spiny lobster, these other lobsters are “unregulated” meaning they do not have a minimum size limit or season; however, egg bearing females must be released. In Florida, aquatic species that are “unregulated” have a daily harvest limit of “two fish or 100 pounds per person per day- whichever is more” the rule can be found here. However, there are some areas in Everglades National Park, Biscayne Bay and Monroe County that are protected and have lobster restrictions that can affect the harvest of unregulated lobster species. If you’re planning to harvest bugs anywhere near those areas, be sure to consult regulations specific to those locations.

In Southwest Florida you’re good to harvest the spotted spiny, Spanish and ridged slipper lobster year-round if you aren’t within the boundaries of the Dry Tortugas or Everglades National Park. Most of these unregulated bugs mentioned above will be caught as by-catch while lobstering or spearfishing as they can be more elusive hiding deep within or upside down in structures/holes.

The Other Spiny Lobster: Among the 3 commonly found unregulated lobster species, the spotted spiny lobster is the least likely found in the Gulf. This decapod usually seeks refuge on the underside of large bouldering coral heads such as the great star coral (Montastraea cavernosa) or deep within the structures like rock jetties that are in areas with not much fluctuation in salinity or temperature. Spotted spinys are more frequently found near Southeast Florida or the Keys where these coral heads are more common, and inshore conditions are less estuarine. These lobsters are generally much smaller than their cousin the Caribbean spiny lobster, a large spotted spiny would be similar size to a barely legal Caribbean spiny lobster. Slipper lobster take refuge in cracks, ledges and often inhabit the same swiss-cheese pothole bottom as red grouper. Be sure to check the inside of grouper holes with a flashlight as the slipper lobster can be harder to spot than their spiny cousins. Spanish and ridged slipper lobster don’t have long easy to see antennae but instead have plate like ones that give them their “bulldozer” appearance. Just like the spiny lobster, its common to find multiple slipper lobster in close proximity, so check the area thoroughly if you find one! On average, both species of slipper lobster are smaller than Caribbean spiny lobster and are usually around 8-12 inches in total length. In my opinion and the opinion of many others, slippers and spotted spiny lobster taste just as good if not better than Caribbean spiny lobsters and can be prepared in a similar fashion. When grilling slipper lobster tails, I like to cut the shell completely off from the underside of the tail and grill as if the lobster was on its “back.” I keep the tail from rolling one side or another by lightly balling some aluminum foil and pressing the tail in to create a “saddle.” Now you have the perfect apparatus to keep your butter and seasonings in contact with the lobster and prevent them from dripping off in the flames! Expand your seafood pallet and try some today! 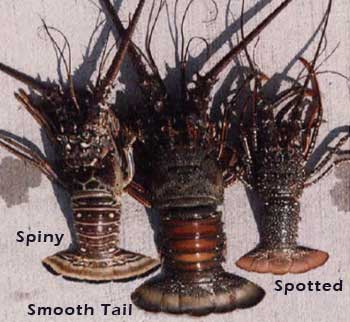 There is one more species of spiny lobster that can be found in Florida but finding one is very uncommon. The smooth tail spiny lobster (Panulirus Laevicauda) has been caught off Florida’s East coast but I haven’t heard of any reports of them being found in the Gulf. There are also a few other species of slipper lobster that divers occasionally bump into. The Chace slipper lobster (Scyllarides chacei) and the sculptured slipper lobster (Parribacus antarcticus) can be found around Florida but are considerably rarer to find than the Spanish and ridged slipper lobster. When reviewing lobster regulations set by the Gulf of Mexico Fishery Management Council and NOAA, another family of lobster was mentioned, Synaxidae or furry lobster, these bugs would fall within the same restrictions as the “unregulated” variety but honestly I did not know people harvested them.